Jordan Hayes plays one of the doctors racing to stop a deadly virus in Helix [source: beyondhollywood.com]

I rewound my DVR twice to make sure I heard it right, and yes, it’s definitely there: ten minutes into the pilot of Helix, the best faux-curse word on network TV makes its grand return. “This is gonna be the most frakked-up family reunion ever,” riffs Catherine LeMieux as Dr. Doreen Boyle, a veterinary pathologist who’s equal parts jolly and acerbic. It’s a true statement, not just for the soapy dynamics of Helix, which include a brother-wife-brother love triangle, but also for Syfy, which has enlisted executive producer Ronald D. Moore once again to work some magic for their oft-overlooked network. Moore is the geek cult figure best known as the mastermind behind the devastatingly good 2003 Battlestar Galactica reboot. His last partnership with Syfy, the Battlestar prequel series Caprica, didn’t fare as well, and the plug was pulled after a single season. But Helix demonstrates great promise for both Moore and Syfy, and as much as I’d like to spend all my time comparing this new show to Battlestar, Helix is clearly its own creature.

But first, let’s get those Battlestar comparisons out of the way. Aside from the “frakking” nod (and it remains to be seen whether the term comes from the character’s meta knowledge of BSG or that it simply exists in this universe as well), there are plenty of familiar spaces within Helix. The show, which follows a team of scientists from the Centers for Disease Control as they attempt to contain and treat a mystery virus, takes place in a frozen Arctic tundra, a place so remote it remains international territory (the nearest camp, we’re assured, is only 200 miles away.)

In many ways, the laboratory of Helix resembles the, well, Battlestar of Battlestar; instead of being confined by the huge fatal wasteland of deep space, we’re confined by the huge fatal wasteland of Arctic wilderness—and there’s plenty of pneumatic door hissing to remind us just how self-contained we are. The arctic station, owned by the enigmatically-named Ilaria Corporation (coughTheDharmaInitiavecough) is sterile and claustrophobic, with a sick bay and crew quarters that retain the same nautical-analogy quality as BSG. We’ve even got new uniforms: instead of the standard black wifebeaters and cargo pants of BSG, we now have form-flattering maroon-and-red scrubs. Ronald Moore is all about creating the world, and its fun to watch him define the world of Helix with these visual cues. 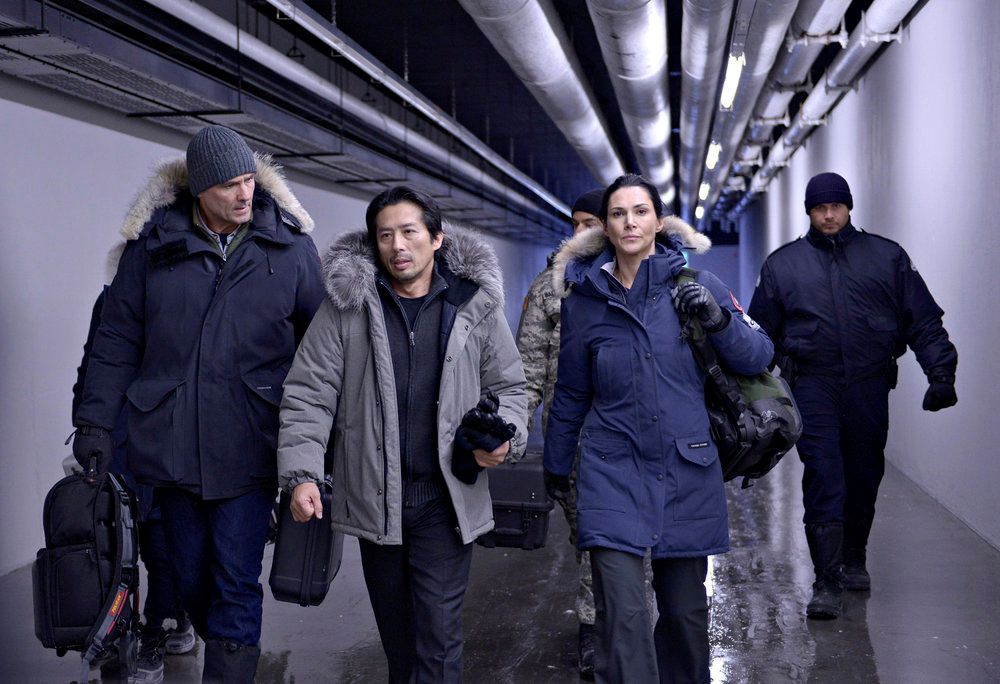 The cast of Helix, which promises to deliver some serious ensemble work, is headed up by Billy Campbell as Dr. Alan Farragut, the CDC scientist leading the investigation into our mystery disease. Campbell is the kind of actor who has just the right amount of clout and innate amiability to carry this show for the first few episodes at least. His Dr. Farragut isn’t a particularly original character – the handsome scientist whose work challenges his morality as he struggles to save the ones he loves – you know the drill. Those loved ones, in this case, are his brother Peter (Neil Napier), who just happens to be Patient 0 for the plague, and his ex-wife Julia (Kyra Zagorsky), who’s another doctor assigned to this mission who also slept with his brother years ago. I’m hoping for some Lost-esque reveals that will show all these family ties to be more than just coincidence, but maybe I’m just swayed by the appearance of Hiroyuka Sanada playing yet another inscrutable Japanese scientist.

Sanada’s Dr. Hatake and his sidekick/bodyguard/adopted son Daniel (Meegwun Fairbrother) appear to be setting themselves up as our villains, in conjuction with Major Sergio Balleseros (Mark Ghanimé), a military official who clearly has some ulterior motives. We’ve also got Jordan Hayes as the 26-year-old sexy science wunderkind Dr. Sarah Jordan, who may have a crush on Alan, and the aforementioned ex-wife Dr. Catherine LeMieux, who seems to know the most actual science. There are also the residents of the Ilaria complex, mostly scientists themselves, who’ll provide the pool of potential new characters/cannon fodder.

The first three episodes of Helix (the first two, “Pilot” and “Vector” aired together as a double premiere) set up the unstoppable-virus story arc in a way that is exciting while still being familiar. Those infected by the (yet-unnamed) virus either drop dead right away, or become “vectors,” aggressive spreaders of the disease who develop superhuman strength, speed, and the uncanny ability to leap with ease into vertical ventilation shafts. There’s an unsubtle zombie quality to the vectors, who bleed blackish goop until their flesh totally melts off their bones (demonstrated in a fun bit of gross-out exploitation) and who spread the disease by spitting/vomiting disgusting ooze into their victim’s mouths.

Much of the plot still surrounds the tedious chore of people getting infected and then lying about being infected, thus spreading the infection further, and since all the characters are doctors it’s more than a little aggravating to watch. But by the end of Episode 3, “274,” most of that business seems to be taken care of, and there are much more interesting narratives to dive into from here: the mysterious cover-up of a graveyard of dead monkeys, the shady relationship between Hatake and Belleseros, and the implications of biological warfare in undefined territory. (There’s a foreshadowing of a potential rogue martial law situation, another parallel to Battlestar—the last one I’ll make, I swear!)

Even with the threat of a virus that’ll liquefy you alive, there’s still time for some romantic overtones for Dr. Walker (Kyra Zagorsky) and Dr. Farragut (Billy Campbell) [source: tv.com]

Helix may not be breaking any new ground (yet), but Syfy has aptly delivered a solid, compelling premiere to a series that will hopefully yield high rewards for viewers. It looks to be an interesting ride, and with Ron Moore at the helm, Helix should have enough intrigued viewers to at least make it through a first season.

Helix airs Fridays at 10 on Syfy.