Deadshirt Is Watching…is a weekly feature in which Deadshirt staff, contributors, and guests sound off on the television shows we’re tuned into, from intense dramas to clever sitcoms to the most insane reality shows. This week: Agents of S.H.I.E.L.D, Steven Universe, Gotham, and Star Wars Rebels. 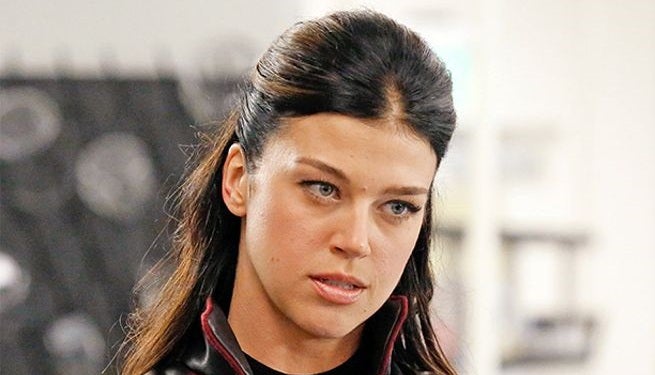 Last season of S.H.I.E.L.D. felt aggressively like a CBS prime time procedural that happened to reference The Avengers every ten minutes, but now that they’ve found their footing (and some ex-Alias writers) the show feels much more like what Heroes always aspired to be: a silver screen comic book, situated equidistant to its twin poles of influence–soap operas and pulp serials. This episode deftly balances some well done spy-fi suspense, with Agent Simmons outed as being undercover in HYDRA, alongside some garden tending with the core cast’s various dangling plot threads.

The disgraced traitor Ward gets some screen time, thankfully, as his character finally has something interesting going for him (even if that point of interest is batshit insanity). The neverending ex-wife jokes newcomer Lance Hunter keeps spewing finally pay off as Adrianne Palicki joins the cast as his former spouse Bobbi Morse. The weird tension between Coulson and Skye continues. I don’t particularly like or buy their father/daughter bullshit, even if it does give amazing guest star Kyle MacLachlan a motivation for teaming with his enemies. Despite straddling many genres, at its heart this show feels like a fucked up workplace comedy and Coulson is less a concerned/conflicted patriarch than a shitty boss who can’t consistently put his foot down. This is what happens when Nick Fury leaves to walk the Earth like Caine in Kung Fu.

The show manages to be fun and thrilling in the MCU tradition without needing to constantly wink at the audience. Hopefully they stay on this current path.

Episode Highlight: Ruth Negga as Raina. Just, you know, anything she chooses to do. She’s just wonderful. Cartoon Network is running a lot of really outstanding shows right now. I could go on for hours about how the success of shows like Adventure Time has encouraged a new generation of animators and creators to be more bold and personal in their work. But of their current crop, Steven Universe is far and away the show that has touched me the deepest. Beyond its gorgeous character and background designs, goofy humor, and sweet, unassuming music, SU has the ability to regularly hit powerful emotional beats that leave me speechless or misty-eyed.

“Island Adventure” is no slouch in that department. It’s the closest focus we’ve seen yet on Steven’s friends Lars and Sadie from the donut shop, two characters who have so far lived in the background. There’s a lot going on, including confirmation of a crush/attraction between the two and a chance to look a little bit passed their one-dimensional exteriors. Lars is still a jerk, but we kind of get an idea of why he’s a jerk. Sadie has a crush on him, but it’s more complicated than that, and it’ll definitely resonant with anyone who’s had a friend (or maybe it was you) who’s liked someone who’s clearly bad news. We didn’t get a whole lot of additions to the show’s burgeoning mythology, but what could’ve easily been a filler episode ended up as a fun and touching take on a basic desert island plot.

Episode Highlight: So many to choose from! Let’s see: Amethyst’s The Fly visual gag, the song Steven sings, and the giant invisible monster were all great, but honestly, Lars’ “Do you ever feel alone even when other people are around?” was the perfect blend of douche-at-a-party faux wisdom and genuine pain. I like that Steven Universe doesn’t let any character be totally flat, and the more we see of Lars, the more I like him, in spite of himself.

Gotham is the most enjoyable hot nonsense on television right now thanks to its perplexing ability to straddle the line between “decent cop show procedural with Batman stuff” and “flat out farce.” This episode, “Viper,” sticks to the show’s pretty standard formula–Gordon and Bullock investigate stuff via montage, The Penguin and Fish Mooney scheme, the bad guy of the week somehow dies thanks to judicious police brutality–but moves along some interesting background intrigue with the moving parts of the brewing Gotham gang war and Bruce investigating a crime traced back to a terrifically sinister Waynecorp in the aftermath of his parents’ death.

Gotham is, essentially, dedicated to some really good character actors competitively chewing scenery and, man, everyone showed up to play this week. Robin Taylor, who’s well on his way to portraying the definitive version of The Penguin, plays unwilling hostage to underboss Sal Maroni this episode, and his slimey jitteriness and nerdy false bravado really shine. Speaking of Maroni, David Zaya’s jovial menace here is killer, and his two-way interrogation of Cobblepot and Gordon is fantastically tense. David Mazouz’s steely young Bruce Wayne often lacks a good reason to be onscreen in this show but watching him stare down a condescending Wayne Enterprises bureaucrat is a blast.

We can argue whether Gotham holds together as a show or even how much it works as a “Batman” show, but five episodes in, I’m loving this weird wild ride.

Episode Highlight: Donal Logue calling a dying old man a terrorist then getting thrown around a room, then not knowing what the word “altruism” means. Seriously, how is this show real? It’s beautiful. 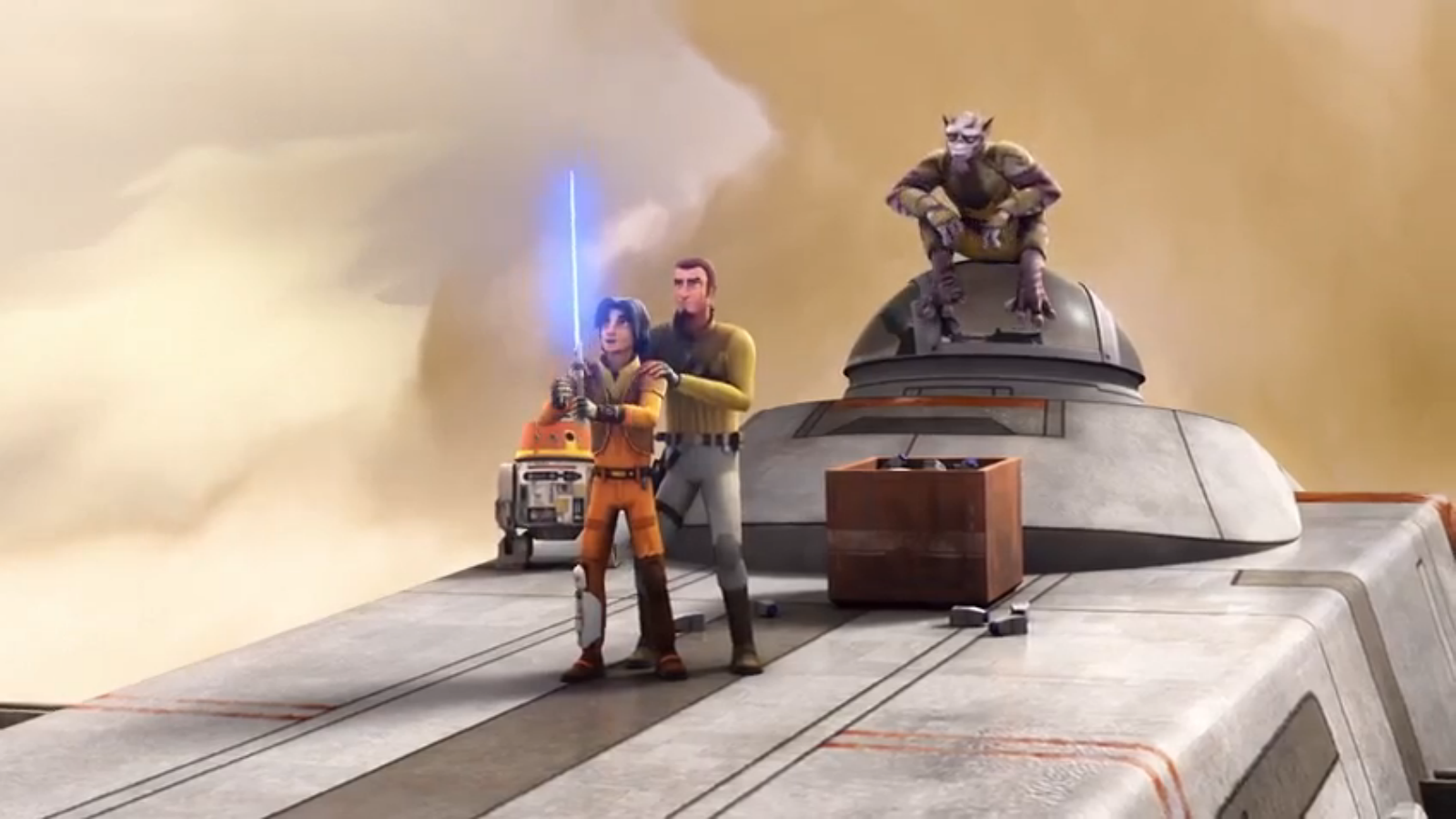 After the success of the initial Star Wars trilogy, George Lucas and the other creative people behind the franchise did a good job identifying what people found to be the coolest part of the series: the magic samurai-monks with laser swords, the Jedi. They decided to give the people what they want, giving most of the subsequent Star Wars properties (movies, television shows, video games) a heavier Jedi focus, but ignoring one of the basic tenets of economics: scarcity increases value. So, after enduring decades of cool but gratuitous lightsaber fights and instances of a single Jedi mowing through an entire platoon, the now Disney-owned Lucasfilm gives us a return to basics with Star Wars Rebels.

Rebels digs deep and finds the initial formula that worked so well for Star Wars: a motley group of outlaws and misfits sticking it to the unquestionably evil monolith that is The Empire. The Jedi stuff is still there: the rebels are lead by a Jedi-in-hiding, Kanan, and the main protagonist, young Ezra, is strong with The Force, but usually it takes a back seat to the group’s capers. The exception is this week’s “Rise of the Old Masters,” where the main conflict is Ezra’s difficulty handling training from Kanan. The rest of the crew gets involved via a prison break-in/out to rescue a captured Jedi master who Kanan hopes will help train Ezra. It’s here we get to see a bit what each of the characters brings to the group. It turns out the whole mission was a trap set by the Inquisitor, a Sith who’s hunting down the remaining Jedi. Unsurprisingly, our heroes do escape (with the help of some very horny flying creatures) and Kanan and Ezra have to come to terms with the fact that, for better or for worse, they’re stuck as master and apprentice.

Episode Highlight: I know I spent a while railing against too much Jedi and lightsabers, but the duel between Kanan and the Inquisitor and the subsequent escape are very exciting and the Jedi action feels earned. Plus, several characters asking Kanan “Does yours do that?” as the Inquisitor’s lightsaber gets more and more complicated.