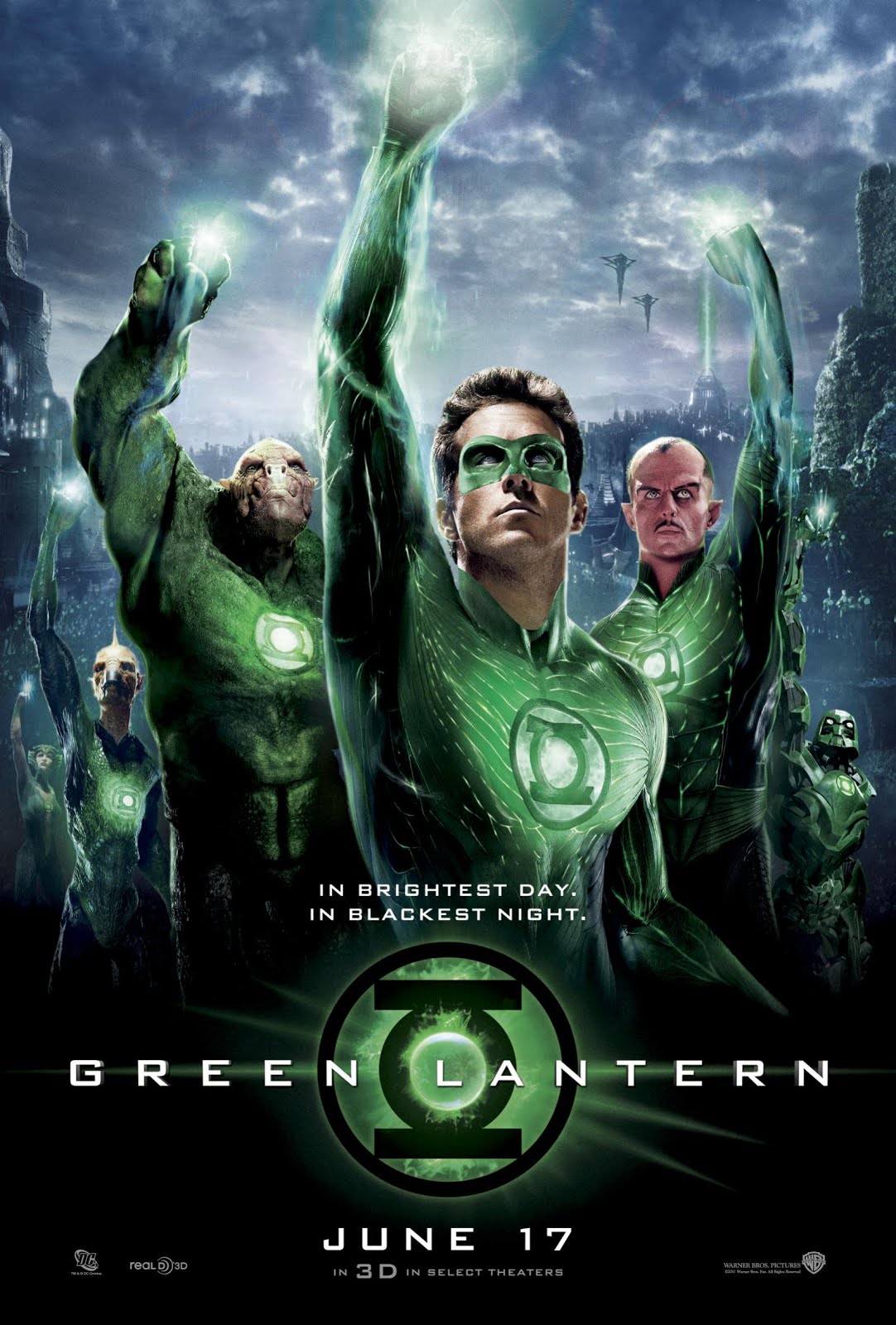 This week, our team of dedicated comic geeks and cinephiles take on the movie that baffled both communities – Green Lantern. Here’s what we’re starting with:

A test pilot is granted an alien ring that bestows him with otherworldly powers, as well as membership into an intergalactic squadron tasked with keeping peace within the universe. (IMDB)

Now each of us has about 100 words to pitch our own movie based on this same logline. We’re all familiar with the Green Lantern franchise through the original comics, appearances in animated series, and of course, this movie, and we’re free to mine the source material, or we can use the logline above as a jumping off point for a totally unrelated story.

Okay, we’re charged up and ready to fly, so let’s see where this crazy test flight takes us… Set in 1947, test pilot Chuck Yeager is entrusted by benevolent aliens with the ultimate weapon – a ring that gives him amazing powers with which to fight off a coming extraterrestrial menace. But when the US government discovers Yeager has the means to wipe out the commies once and for all, Chuck must choose between his long-held loyalty to his country and his new commitment to the cosmos with the Green Lantern Corps. The conflict comes to a head in a massive aerial battle between GLC, the despotic alien Controllers, the USSR and the brand new US Air Force.

John Stewart–Marine, artist, engineer–is chosen for his rare mix of talents by a universal peacekeeping force to wield a ring of great power and protect an entire space sector. Whisked away from life on Earth in mere seconds, Stewart struggles to adapt to various bizarre colleagues and experiences. After crossing the pirate Kanjar-Rho, Stewart’s worst fears are realized as his vengeful adversary targets Earth for destruction.

Red Lantern Corps. That is all. Carol Ferris dreams of space but has continually been kept from piloting one of her father’s company’s test craft, until the day that she and childhood friend Hal Jordan steal an experimental space jet. When the jet gets caught between Space Cop Abin Sur of the Green Lantern Corps and a ship of space criminals (Including Evil Star, Krona and Despotellis) who have Con-Aired their way to Earth, Hal perishes but an injured Abin Sur gifts his ring to Carol. Inheriting his place in the GLC, Carol must learn the ropes of her new duties with the help of the wounded alien and keep the escapees from wreaking havoc on Earth.

Newly graduated Hal Jordan (Ryan Reynolds) is eager to break into the working world, but his degree in American History and lack of job experience isn’t helping. After responding to a post on Craigslist, Hal is hired to test out fighter jet safety features for Ferris Aircraft. During a standard cliff-side impact test, Hal meets a dying alien after crawling from the burning wreckage and is given a mysterious power ring. Little does he know that the ring is actually toxic to humans and after a brief stint as a superhero ends up in a long, arduous battle for his life without a single one-liner. Funny man Kevin James plays Ferris’ dour trial lawyer.

Test pilot Hal Jordan is given a Green Lantern ring by a dying alien. Hal’s transported to Oa, where he discovers that the alien visited Earth to defend it from an upcoming invasion and now Hal must take his place in the GLC. He’s only the second human to be a GL, so expectations are high. He demonstrates his ability by stopping crimes on Earth and becomes an effective hero. The film culminates in a battle between the GLC and an invasion of Manhunters. Cameo by Kyle MacLachlan as Alan Scott, the first human GL and member of the GL Honor Corps.

Hal Jordan finds himself working as a test pilot after being discharged from the military for disobeying an order he considered reckless. After warily accepting the Green Lantern ring from a dying Abin Sur, he heads to Oa for training. Hal’s first case upon completing training is to investigate several strange attacks on planets. He is joined by Kilowog, whose planet was also attacked. They discover the culprit is Sinestro, a former human Green Lantern whose mind and body were warped by the power of the Yellow Ring. The two manage to intercept and defeat Sinestro amid his attack on Earth. On the way to space jail, Sinestro warns Jordan that he will befall a similar fate but Hal just pantses him. Freeze-frame of Hal and Kilowog construct hi-fiving. My take would veer towards being more of a western. After receiving a power ring from dying alien Abin Sur, cocky test pilot Hal Jordan establishes himself as Coast City’s beloved local superhero Green Lantern after easily foiling bank robbers and costumed crooks. When a posse of veteran Green Lantern Corpsmen (including sector partners Katma Tui and Sinestro, “blind” Lantern Rot Lop Fan, living robot Stel and the bloodthirsty Boodika) arrive on Earth and draft Jordan into an off-the-books deep-space mission to bring Sur’s murderer Mongul to justice, he discovers that the universe and the responsibilities he’s inherited are far deadlier than he’d ever imagined.

None of this takes place on Earth. We jump in en media res, with Sinestro, Hal Jordan, Kilowog, and Tomar Re heading to a planet on the outskirts of the system. Several outlying colonies have been winking out of existence, incidents increasing at a troubling rate. We learn that these settlements are being devoured in a mathematically predictable pattern and our erstwhile heroes set out to the next colony to be hit. Think Seven Samurai but in space. The villains of the piece are the Manhunters, and while Lanterns succeed in stopping the encroaching machines, the colony and thousands of lives are lost, sowing doubt in the heroes. This causes Hal to redouble his efforts, and Sinestro to begin down the path of darkness.

That’s it for this week’s Deadshirt Garage! Have a favorite pitch? Have a pitch of your own? Post below in the comments! And don’t forget to check back to see what movie the crew takes on next week.