Edgar Wright’s The World’s End came out in the US last week and, having seen it twice, it’s (in my mind) unquestionably the best film he’s made. Wright has always been one of the sharpest filmmakers around, but the command of visuals and theme on display in The World’s End really pushes it to the top of his (frankly, spotless) repertoire. Rather than review the film (and why would I when Dominic Griffin’s outstanding review sits here on THIS VERY WEBSITE), I want to talk about something that clicked for me in my second viewing; how deftly Edgar Wright and Simon Pegg’s script weaves elements of the Arthurian Grail Quest into The World’s End (Spoilers below).

The Holy Grail, a key aspect of the King Arthur mythos in both literature and film, is (on a very bare bones level) symbolic of the fall of Camelot and the quest for immortality. In “The Holy Grail” (an extended poem found in Alfred Lord Tennyson’s Idylls of the King) an image of the grail appears before the assembled knights of The Round Table and inspires Sir Percivale and a handful of others to seek it out. By the end of the tale only a select few of Arthur’s knights return to Camelot and even then, only with glimpses of the object they had sought. Without the grail, Camelot is doomed to destruction.

The key to understanding the Holy Grail is that it isn’t so much a physical object as it is an ideal, a standard. The World’s End understands this. In describing the film, Wright referred to it as “a quest movie with an extremely irresponsible King Arthur at the head of it.”

Simon Pegg’s Gary King, a king without a kingdom

The hero of The World’s End is Simon Pegg’s stunted rock-star-in-his-own-mind Gary King, who has decided (for reasons not entirely clear from the onset) to gather together his high school friends to finish a twelve pub drinking tour of their hometown that they failed to complete twenty years ago. That’s first name Gary last name KING. Gary’s other companions have surnames that suggest a court as well: Andrew Knightley, Oliver Chamberlain, Steven Prince, Peter Page.

Where the Grail elements really start to click is in Gary’s seemingly often off-hand bits of dialogue. Early on, when Gary first approaches Peter (Eddie Marsan), he refers to himself as “The Once and Future King”. Later, after Gary discovers that Andrew (Nick Frost) is a teetotaler, he admonishes him for drinking “fucking rain” and suggests that nobody in Camelot drank water, only mead (“the king of beers”).

The men of The World’s End are approaching their forties and have a measure of success; some have families, a respectable career, financial security. Except Gary. Gary has nothing: he’s squandered his life on substance abuse and peaked in his twenties. He drives the same car he did in high school, he wears the same black duster and even listens to the same mixtapes on his stereo. When Sam (Rosamund Pike), who he had a fling with in his school days, asks Gary “What happened to you?”, he replies with sober honesty “Nothing. Nothing happened to me. I’m still the same old Gary.” Gary completely defines himself by this one evening of drinking that occurred twenty years ago. Towards the end of the film, Andrew discovers that Gary had tried to kill himself and has been living in a psychiatric hospital. With tears in his eyes, Gary explains that their quest for The World’s End pub was supposed to be the beginning of his life.

With that, we finally understand Gary’s manic devotion to reliving the past with men he hasn’t seen in decades: Gary, like Arthur’s knights, is on a quest for immortality at the bottom of a cup (specifically, a pint glass). Just as finding the grail would save Camelot from destruction, Gary believes drinking the long-desired 12th cup is his salvation: if he finishes, he can start living. 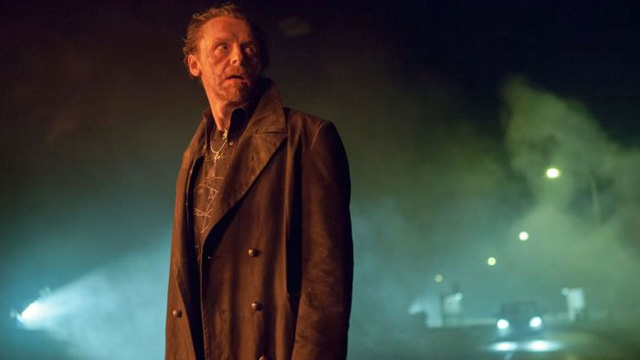 Like Percivale, Gary ultimately doesn’t reach this prized cup. The difference here, however, is choice; Gary chooses not to drink the final beer. Taking it further, when the film’s alien villains offer Gary what he’s truly wanted all these years, a chance to start his life over young and vital, he soundly rejects them. And just as Camelot falls, here modern civilization crumbles because of Gary’s choice; The Network abandons Earth and all technology on Earth is rendered useless.

It’s in Gary’s choice that he finally gets a measure of what he’s sought for so long. In the film’s epilogue, we watch as the film’s five companions adjust to their new (mostly better off) lives: Andrew is back with his estranged family, Steven and Sam have a life together, Peter (or rather Peter’s robot duplicate) is happy and confident. When we get to Gary, he’s traveling “…on a quest, of sorts” with the Network’s robot doubles of his friends as they appeared when they were in high school. What that quest is isn’t explicitly stated but I think there are a couple things to take away from it. Gary King has found a calling that’s worth following: fighting for the honor of his new inhuman friends in a world that despises them. Having learned from a lifetime of bad choices, Gary King (of the humans) has what he always wanted, no cup required: a chance to begin again and finally live his life.

2 thoughts on “Magna Lager Holy Grail: Gary King and The Arthur Quest in The World’s End”