There are very few video game franchises that I have been playing as long as Mario Kart. The first installment, Super Mario Kart, came with the Super Nintendo I received for Christmas in 1996. 18 years later, I’ve played every version of the game released on home consoles, from the excellent (64, Double Dash), to the not-so-great (Wii). Even if the next version was bad, I was still going to get it, and I was probably still going to love it. Thankfully, Mario Kart 8 is actually wonderful, proving once again that Nintendo knows what it’s doing with the increasingly undervalued Wii U. With gorgeous graphics, robust gameplay options, and a lot of love put into it, Mario Kart 8 is a must-own for anyone with a Wii U.

Any veterans of the Mario Kart series will understand the structure of the game immediately. The main single-player mode, Grand Prix, is divided into 3 “engine sizes” that also function as difficulty levels. On 50cc, it’s easy for anyone to win consistently, but by the time you work up to 150cc, AI racers are aggressive and will give even seasoned racers a run for their money. The game has 8 cups of 4 tracks each; as per tradition, half of these tracks are brand new while the other half have been cherry picked from previous games and given a next-gen facelift. As in other recent iterations, coins are scattered around the tracks; collecting up to 10 per race increases your top speed and amassing them over time unlocks new karts, wheels, and gliders. If you have friends, up to three more of them can tackle the Grand Prix mode with you or you can set up your own races with custom rules, item settings, and computer racers. If you have friends who don’t like to come over to your house, the online mode is surprisingly fantastic. Nintendo has a spotty record when it comes to online multiplayer, but I was able to easily and quickly find matches and never experienced lag during play.

All of the new tracks in MK8 are bursting with character and providing ample opportunities to use the game’s new feature: anti-gravity. On certain sections of track, the karts’ wheels will transform and allow racers to drive vertically and even upside down. While in anti-gravity mode, running into other characters gives your racer a speed boost, allowing for some interesting strategic choices. At first the anti-gravity didn’t seem like a radical change, because the camera is still fixed directly behind the player’s character, and going inverted does not fundamentally change the way you play, but as I became more comfortable playing and didn’t need to focus on my racer so intently, I noticed how the environments shift around the tracks as you move into the gravity-defying sections and could appreciate how cool it is, even if it’s inconsequential.

Even the returning tracks have been retrofitted to include anti-gravity, along with other relatively new features like underwater and gliding sections. A couple of the retro choices are head-scratchers, but overall the course selection is robust and varied, with plenty of shortcuts and hidden details to discover. For the first time in the series, every single track has its own musical theme–fully orchestrated, might I add. Even returning themes from previous games have been jazzed up. The game sounds gorgeous and the soundtrack is catchy and hummable. Mario Kart 8 is easily the nicest-looking game that Nintendo has ever produced. Every track is stuffed to the gills with details; even in areas that pass by in the blink of an eye, the developers have hidden little details that make the racecourses feel like actual locations. The Wii U may not be as powerful as other next-generation consoles, but MK8 runs at 1080p with a consistent, buttery 60 frames per second. The character and kart models are detailed and have charming little animations, hair and mustaches blow in the breeze, characters perform unique tricks off of ramps, and the engines and suspensions on the karts move as you drive. All of these details are easy to revel in using the new replay editor, which lets players review their races and put together clips that can be uploaded online. The editor is simple and easy to use, and while it isn’t as in-depth as someone with video editing experience would like (the game basically picks out clips of “interesting” things that happened during the race for you to choose from and stitch together), it’s a nice distraction nonetheless.

The game does have a couple drawbacks, though nothing to keep me from recommending it. Firstly is the Battle Mode, which has been basically ruined. In previous iterations, Battle Mode took place in separate arenas, designed specifically for close-quarters kart combat. Here, Battle Mode takes place on regular old racetracks, though drivers can traverse the track in either direction. What this amounts to is driving around the tracks and looking for players for what seems like forever, punctuated with brief moments of excitement. A few times I won multiplayer matches without ever encountering another character. It’s a disappointing change, and one that will undoubtedly reduce replay value for many gamers who found the thrill of Battle Mode a reason to come back when racing lost its allure.

Another disappointment is the racer selection. Some of the newcomers are welcome, like Bowser’s seven children, the Koopa Kids. Each of them have enough individual character to validate their existence. However, there are several clones, including FIVE “baby” characters (Babies Mario, Luigi, Peach, Daisy, and Rosalina), Metal Mario, and the dumbest Mario Kart character to ever exist, Rose Gold Peach. That’s between five and seven character slots that are just completely wasted, depending on how much you like babies. The Mario franchise has such a rich and diverse character library and the inclusion of these over some of my favorite veterans, like Diddy Kong or Birdo, is a letdown. 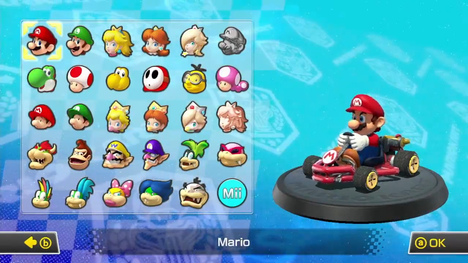 The character select screen. Too many babies. (Source)

Ultimately, Mario Kart 8 is a fantastic game, packed with features and modes and a heaping helping of charm. I’m loathe to say that it’s the best of the franchise (probably because of my personal attachment to Mario Kart 64), but it’s pretty darn close. At first, it looked like the Wii U was going to be unable to keep up with other next-gen systems, but now it’s become clear that they really have no interest in competing with them. Frankly, I don’t buy Nintendo systems to play Call of Duty or Assassin’s Creed. I can find those experiences anywhere. I buy Nintendo systems to reclaim the childlike wonder that video games gave me when I was young. Mario Kart 8 is a reminder that, where Nintendo is concerned, quality rules over quantity.