BY HALEY WINTERS AND JESSIE YIM

The Neighbors is just one of the wonderfully wacky TV shows we’ll miss next season. [Source]

The Gods of Television giveth, and they taketh away. For every great new show we are gifted each season, we are sure to suffer twice the loss. And while some viewers are content to wait a few seasons before growing attached to any one program, some of us are all too quick to give our hearts, after one season or even one episode. For we TV romantics, the springtime network announcements are a time of deep mourning. This season, we say goodbye to four sitcoms that we truly believe deserved better.

The family of the single-season Trophy Wife [Source: Examiner.com]

Trophy Wife shares a league with Don’t Trust the B…In Apartment 23 and Cougar Town for sitcoms who have suffered from ill-conceived titles. And while we’re not saying people don’t want to watch comedies with distinctly feminine names, well, let’s just say New Girl is the exception, not the rule. Trophy Wife, a sweet little show about a former party girl (Malin Akerman) who marries a wealthy man (Bradley Whitford) with three children and two ex-wives, was never able to successfully capture a fundamental audience, and despite being greenlit for a full season, it will not be renewed for a second. RIP.

Trophy Wife boasted an exceptional cast and excellent acting. Whitford and Akerman anchored the show as straight men, while a rotation of wacky characters took turns stealing scenes. Marcia Gay Harden was perfectly cold and Michaela Watkins wonderfully kooky as ex-wives one and two, respectively. And while all three lead child actors were strong – Bailee Madison playing amusingly uptight, and Ryan Lee refreshing the classic “dumb son” role with an eternal bright-eyed optimism – the shining star of the show was Albert Tsai as the youngest adopted son, Bert. Mixing physical comedy with a rare dry wit, he is a strong competitor for Funniest Kid Actor against a certain other, more popular “modern family” sitcom.

What was really special about Trophy Wife was the relationships it formed among its characters, and most of all between the three wives. Initial resentment gives way to tentative understanding, and in the final episode the three women exchange words that have as much emotional resonance as the most romantic declaration of love: “For reasons I can’t really understand, I like you.” The final shot features the entire family in a hotel room wearing robes, pillow fighting and drinking champagne. We would have loved to see Akerman pregnant in future seasons, to watch Bert get more screen time and ultimately see the love between the wives deepen (not in a creepy Big Love kind of way, but in an awesome women-empowering Bechdel-passing kind of way.)

The impressive ensemble of Friends With Better Lives. [Source]

Okay, yes, Friends With Better Lives was oversexed, underplotted, and at times just plain no good. But with a cast like this (James Van Der Beek, Kevin Connolly, Brooklyn Decker, Zoe Lister Jones) it was hard not to grow fond of this scrappy ensemble comedy. Cut short after only 11 episodes, FWBL got shafted before it ever really got a chance to grow into its own. RIP.

We’ve seen this set-up before: six young 30-somethings live, love, and drink together. FWBL’s core included one married-with-kids couple (Majandra Delfino and Kevin Connolly), one recently engaged couple (Brooklyn Decker and Rick Donald), one new divorcé (Van Der Beek) and one single career gal (Lister Jones). If you think that sounds a whole lot like late-season Friends, well, we wouldn’t argue with you, but FWBL tried to carve its own path with some unique and likeable characters. One of its charms was the realistic feel of its core cast, who had more of a boys-and-girls next door look than other shows stuffed with eye candy. Even supermodel Brooklyn Decker is glammed down for a truly enjoyable role as the (no surprise here) ditzy sorority girl looking for love. Decker first gained notice for her acting chops in the 2011 romcom Just Go With It, and she continues to demonstrate an uncanny knack for comedic timing. And while JVDB’s newly single hot doctor is fun to watch, the real spicy tamale of the show is Zoe Lister Jones, whose no-nonsense Kate is the best-written woman in comedy television.

Alas, FWBL was never destined to overcome its midseason pickup status, and its stars will be blown to the wind once again. Here’s hoping they all find new permanent homes, and soon. 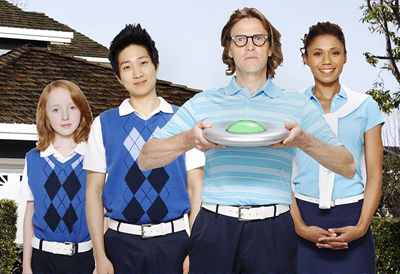 Two things first: 1. This is about the show, The Neighbors, NOT the movie, Neighbors. Not to be childish about it, but The Neighbors came first, okay? 2. No article or essay can properly convey the deep, unconditional adoration we have felt for this show over its too-quick two-season run. Brimming with charm, wit, and sensitivity, The Neighbors was a true gem of network televison. RIP.

Maybe the concept of The Neighbors was just too sophisticated for ABC: a family of humans moves into a community of Zabvronian aliens in suburban New Jersey. The show follows the human Weavers as they navigate the tricky waters of interspecies friendship.  Okay, okay, that description sounds pretty ridiculous, but what Dan Fogelman and company really created with The Neighbors was a beautiful commentary on the absurdities and inequalities in the world we live in. In Zabvronian culture, men are the dominant gender because they bear the children, of course, sex is achieved by deeply into one another’s eyes, physical nourishment is gained from reading books, and everyone cries green goo from their ears. All the Zabvronians are named after famous human athletes, and I challenge anyone to reject the hilarity of Larry Bird and Jackie Joyner-Kersey marrying and giving birth to Reggie Jackson and Dick Butkus. The show delighted in being supremely meta, but without the pretense that often accompanies such self-reflection: you always felt like you were watching the show alongside the writers, instead of being condescended to. The show poked fun at its failing ratings, others shows it competed with, and the unsupportive network that aired it. This is the show that managed a crossover episodes with Shark Tank, for crying out loud.

The Neighbors was a true joy to watch every week for the way it took a common formula – unlikely neighbors learn life lessons while celebrating holidays and big life events together – and made it so incredibly fresh, not only in its goofy comedic stylings but with a real care for its characters’ emotions. Episodes often ended with serious reflection that was heartfelt without being overbearing. In true Neighbors fashion, the finale had the characters commending themselves for having survived as long as they did, figuratively and literally, and reveling in the possibility of being picked up by another network. One of the greatest gifts the show gave us in its last three episodes was introducing DJ Jazzy Jeff, Larry Bird’s Zabvronian brother, played by the heart-meltingly handsome and charismatic Joshua Sasse. He and the rest of the Fogelman team will be back on ABC in the fall with Galavant, another ridiculously-conceived show that we’re sure is going to be absolutely fantastic – it’s a medieval musical. Hopefully we’ll get to see some Weavers and Zabvronians resurrected as princes and princesses in the future.

The shortest-lived series on our list, Bad Teacher aired a mere five episodes, and went almost completely unnoticed by the general public. It’s a shame, too, as Bad Teacher had all the ingredients necessary for a real cult gem, similar in many ways to Community, which is unsurprising, as exec producer Hilary Winston also produced on that show. But unlike Community (which we also said goodbye to this year), Bad Teacher was never given the time to grow beyond a caricature of itself. RIP.

Based on a stinker of a movie from 2011 starring Cameron Diaz, Bad Teacher works infinitely better as a television show, and Ari Graynor is an infinitely more charismatic lead than her predecessor. Graynor plays Meredith Davis, a self-described bombshell and gold digger who fakes her way into a teaching job at Richard Nixon Middle School in order to bag her students’ rich fathers. She’s Jeff Winger with curves, and the arc of Bad Teacher isn’t hard to predict for those who have watched Community: eventually, we know, she’ll get sucked into the lives of her students and co-workers, learning the values of friendship, compassion, and leadership. Unfortunately, the show never quite gets that far, and Davis’s sexual antics are often precariously balanced on the fence between funny and deeply disturbing.

Luckily, a colorful supporting cast promises an eventual ensemble-feel, and the scripts are sharp with laugh-out-loud zingers. Ryan Hansen of Party Down fame is looking trim and delicious as the good-guy gym teacher originally played by Jason Segel, and Sara Gilbert gets a welcome spotlight as a mousy and neurotic science teacher. Kristin Davis really just plays an evil Charlotte (her character from Sex and the City) for her role as the uptight history teacher, but hers is a welcome return to television screens. Several talented young actresses, including Sara Rodier and Grace Kaufman, play Davis’ dorky young protegees. As the only true straight men of the series, these preteens have a seriousness that remind us of the real importance of teachers in our education system, and for all its wacky extremities, Bad Teacher is really a love letter to the students and teachers of our schools.

One thought on “RIPitcoms: Pouring One Out for 2014’s Cancelled Gems”