Kate Micucci and Riki Lindholme are Garfunkel and Oates.

It’s about time Garfunkel and Oates got their own TV show.

For those not in the know, that may seem a confusing statement. But if you’ve peeked in on the Los Angeles comedy scene in the last seven-odd years, you’d recognize the names not as the secondary halves of two great bands, but as the stage name of one of the funniest and hardest-working comedy bands in the business.

“Band” isn’t really the right word. Kate Micucci and Riki Lindholme play ukelele and guitar, respectively, and sing almost all their mile-a-minute words in exact melodic unison. Attending a Garfunkel and Oates set is an exercise in speed listening, though the jokes are always packed in such quick succession that for every one you miss you’re sure to catch several more.

Television, therefore, is a no-brainer step for these two (although their last pilot, for HBO in 2011, never made it to air): their songs can be converted into visual segments that are perfect for YouTube rewatching and memorizing. G & O have released a handful of such music videos in recent years, the most elaborate being “The Loophole” (NSFW):

That’s the kind of humor you can expect on the regular from Micucci and Lindholme, and it’s what they do best. They make the profane adorable and the adorable profane. If you didn’t get a least a chuckle out of that, don’t bother with this review, because you’re going to hate this show. You’re also probably a curmudgeonly old lady and what are you doing reading this newfangled internet newspaper anyway?

Garfunkel and Oates is on IFC, home of Portlandia, and it shares much of the same quirked-out comedy style the network is trying to be known for (the IFC slogan is “Always on, slightly off”). But it bears a much more direct resemblance to HBO’s Flight of the Conchords, a show also based on a musical comedy duo. In a lot of ways, Garfunkel and Oates feels like a girls’ version of FotC, which is not a bad thing. But where Conchords’ humor tended toward the sullen, G & O has a much peppier feel, and often consciously styles itself like children’s programming, with puppets, animation segments, and matching outfits all making appearances. The show’s acting is a bit awkward at times, but that should resolve itself as Micucci and Lindholme get more comfortable as a sitcom pair in their new format. Neither are strangers to television–Micucci has had running arcs on Scrubs, Raising Hope, and The Big Bang Theory, while Lindholme’s IMDB track record of playing the one-off pretty blonde girl is impressively long, which gets parodied on the show in a clip of her “reel,” which is nothing but shots of her topless. This and many other jokes on the show are targeted specifically toward Los Angeles and the comedy business. The pair performs at “SuperMelt,” a spin off Nerdmelt, and comedians Natasha Leggero, Anthony Jeselnik, and Tig Notaro make appearances in the first couple episodes, all playing to some degree exaggerations of their own personas. The cameos get more impressive–a highlight scene involves Kate auditioning for the part of “Hot Slut” in a scene with Sir Ben Kingsley, and it’s as ludicrous and hilarious as it sounds.

It took me a while to get to a real laugh-out-loud moment, but the first time it came, it came hard (which is more or less the title of their song about blowjobs). The momentum of the show builds steadily, and shows great promise. But where it really shines is when Kate and Riki get to do their thing and go full musical. Their music videos have a 1998 Windows aesthetic which is always something I enjoy. And when called upon, they go beyond shock factor or heavy wordplay (both of which they use extensively) and tackle songs with real heart, such as when they write a wedding song for two gay puppets on a Sesame Street-style show. (It’s a lot sweeter than it sounds written out like that.) 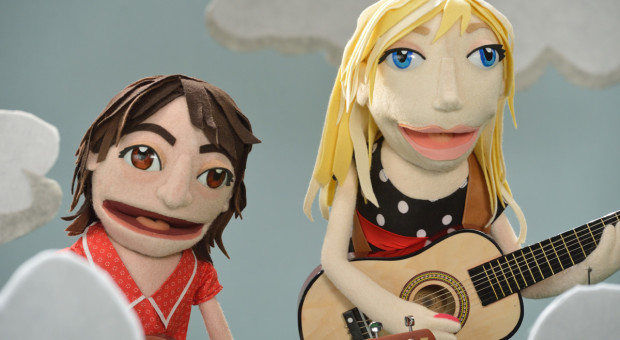 All in all, the ingredients are there for Lindholme and Micucci to finally make the move from locally known to full-blown famous. Garfunkel and Oates is off to a promising start, and its audience is sure to follow.

You can watch Garfunkel and Oates Thursdays at 10pm on IFC.