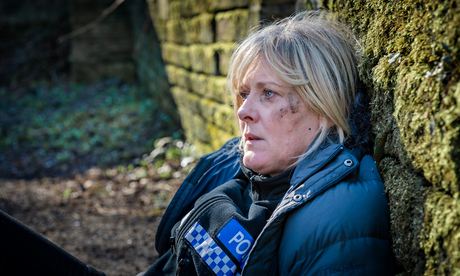 Sarah Lancashire stars as a police officer with a tragic history in Happy Valley.

I tend to associate the BBC exclusively with energetic romps like Doctor Who. Many of the network’s shows are, if not light, funny in their own right. But Happy Valley, which has been bought and promoted by Netflix, is possibly one of the darkest shows I have ever encountered. In fact, the only truly funny moment is used in their advertising: “I’m Catherine, by the way. I’m forty-seven, I’m divorced, I live with my sister who’s a recovering heroin addict. I have two grown-up children. One dead, one who doesn’t speak to me, and a grandson.” The delivery of the line is perfection itself. Sarah Lancashire, the wonderful actress who portrays protagonist Catherine Cawood, manages to say this line in a way that makes her seem vulnerable and strong at the same time…and it’s funny. I wanted so badly to love her. I remember watching that preview, chuckling at the line, and thinking that this was a show I would enjoy. Don’t get me wrong, I never thought it was going to be a comedy. But the preview made it seem as though there would be a balance of the light and the dark, just like in most works of television and literature, just like in life (if you know how to look). Yet in Happy Valley I found no balance, only darkness.

Believe it or not, Catherine’s story is even sadder than she lets on. Her dead child isn’t just dead; she killed herself. To make matters worse, the suicide was the aftermath of a rape, during which the aforementioned grandson was conceived. Really. It doesn’t get more tragic than this, until we encounter the absolute horrors that are happening all around Catherine during the series.

The show begins as a standard cop drama (Catherine is a Yorkshire police officer), and it immediately gains points by allowing its very strong female lead to carry the show without the aid of a balancing male character. A few episodes in, we find out Catherine is being “haunted” by her deceased daughter. It’s horrifying and fairly graphic, and combined with the sound effect that accompanies these “hauntings,” one of the more brilliant parts of the show. The sound is amazing–about halfway between that awful high-pitched electronics noise that comes out of a broken television and the hwooshing sound one hears right before fainting. (If you’re lucky enough to have never fainted, think of a loud ocean noise.) The tight sound editing allows the readers to, in a very real way, feel Catherine’s pain.

Catherine’s life is so unbelievably difficult, it is hard to understand how she even survives from one day to the next. Once in a while, Lancashire lets on a crack in her character’s veneer, like when she yells at her sister or grandson, but it is never more so than would we average folks would do if our families were annoying us. We occasionally get to see her internal struggle, but Catherine remains frustratingly obtuse, and unfortunately, this does not work in Happy Valley’s favor. More internal monologue, more telling lines, more something may have made her seem more human. As it stands, she is either superhuman or completely shut down inside, and while the latter is a completely logical way to be given her circumstances, it does not make for a relatable character.

I’ll be honest—the rest of this article is not the popular opinion. This show has been well-received by most viewers. That said, while it certainly has potential, I found myself frequently bored due to incomplete ideas and scattered plotlines.

In terms of characters, we are looking at a ton of partially-developed people being portrayed by some truly good actors. The two people Catherine seems to truly care about are her grandson, Ryan, and a new police officer named Kirsten. Kirsten, portrayed by Sophie Rundle, is surprisingly three-dimensional for her short time on the series, but dies violently and suddenly at the hands of Catherine’s daughter’s rapist. Ryan, played by the young Rhys Connah, is justifiably damaged. He is acting out in school, feeling unloved and unwanted by his family. This is a very difficult character for any actor to play, let alone a child.

Other lead characters include the rapist, Tommy Lee Royce, an underappreciated white-collar worker named Kevin Weatherill, and his boss, Nevison Gallagher. (Can we pause for a moment to appreciate the name Nevison?) Tommy is a psychopath searching for humanity, but he can’t seem to stop killing and raping people. We’ve seen characters like this before, but Tommy falls into a difficult grey area: without the charm of Dexter, you can’t really love him; without the true evil nature of Randall Flagg, you can’t really hate him. He simply is. Luckily, actor James Norton seems to really know this character, and his acting choices occasionally give us glimpses into Tommy’s inner life. When he jumps up onto a wall, balancing on it as a child might, we can briefly see the boy that Tommy once was, and his simple, human desire for joy.

Weatherill and Gallagher are the primary players in a subplot involving Tommy and a number of smaller-time criminals. When Weatherill is denied a pay rise, he develops a scheme to kidnap (but not otherwise harm) Gallagher’s adult daughter. But the plot goes awry when Weatherill begins to have second thoughts, and when it turns out the group of criminals he chose for the misdeed are less than trustworthy. (It’s so hard to find good help these days.) The criminals get greedy, asking for more than the agreed-upon ransom, and end up severely physically, emotionally, and sexually abusing their captive. Interestingly, this story somehow manages to become the driving force for the series while remaining a subplot.

There are also many, many other characters, but none of them are developed enough to really fall in love with as an audience member. This is particularly disappointing for Clare Cawood, Catherine’s sister, who is portrayed by Downton Abbey’s Siobhan Finneran. On Abbey, she portrayed the delightfully sickening Sarah O’Brien. I truly hope they give Finneran more to do next season (Happy Valley has already been picked up for renewal by the BBC). 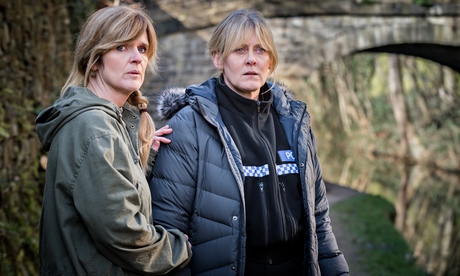 The Cawood sisters, as portrayed by Siobhan Finneran (left) and Sarah Lancashire.

The lack of a strong focus often resulted in me becoming unfocused as a viewer. There was so much happening, I couldn’t figure out who to love, who to hate, or who to love to hate. I wasn’t sure which plotline I should be following. Sure, that’s like life. And, in life, people and stories are often not strongly connected or easily followed. But this is television, and in television, we need some level of clarity. As a fan of large-cast books, shows, and films, including very violent ones (hello, Game of Thrones), it hurts me to say this show was overwhelming. Though the violence was essential to the plot, I did find myself wondering why. Why is this show so violent? Game of Thrones is at least as violent, if not more so, but the violence seems to be evened out over the lives of several characters. Catherine gets the entire run of GoT’s violence condensed into her life alone. I suppose that it could be viewed as a character exploration: can one person survive this level of tragedy without going mad? How? It becomes clear pretty quickly that Catherine can, in fact, survive with only a low level of madness (which becomes clear in the final episode—I can’t bring myself to spoil that part for you, as it is the first part that becomes truly exciting). So, the question of why remains. And beyond just the why of it…what now? Now that we know she is a survivor, what will happen next to keep the violence interesting and necessary? What, if anything, will keep us coming back for more?

You can watch the first season of Happy Valley on Netflix.

Mattie was once told that she looks like Punky Brewster and considers that to be the greatest compliment of her life. She really enjoys talking about literature, television, and shoes.

One thought on “Happy Valley is Unexpectedly Dark [Review]”