In a lot of ways, 2014 has been a year of Very Important Television. There were shows like True Detective, which employed Hollywood heavy-hitters to deliver serious drama. There were much-anticipated superhero franchises like Gotham and Constantine, which lived up to or betrayed the expectations of fans, depending on who you ask. We had the socio-anthropological studiousness of Transparent, the despair of The Leftovers, the black humor of Fargo. In short, it’s been a great year to be a television critic. But as we here at Deadshirt proudly publish our year-end lists and wrap up our last TV reviews, I can’t help but feel I’ve dropped the ball as editor of this section. Because in truth, there is only one show that I’ve been watching live every week the year without fail, and I haven’t so much as mentioned it. Maybe it’s because it’s seemed too lighthearted compared to some of the major drama of this season. Maybe it’s because no one else seemed to be really paying attention to a rom-com on The CW. But it’s time I righted my wrongdoing, and said this loud and clear: Jane the Virgin is the best thing to happen to television in 2014.

Most likely you’ve heard about Jane the Virgin in passing, maybe from a billboard, maybe from a Buzzfeed list you almost skimmed through before you were distracted by the 37 Cutest Puppies of 2014. You might know that it’s one of the best critically reviewed shows of the season, but that it’s plagued by dismally low viewership. Maybe you’ve been meaning to watch it, in a haphazard, half-hearted sort of way.

Get off your ass. Put on the first episode. Don’t stop.

Justin Baldoni as Rafael and Gina Rodriguez as Jane.

Let’s start with the basics of what makes this show work: the storytelling. Adapted from Venezuelan telenovela Juana La Virgen, the plot is as convoluted and topsy-turvy as you could expect from the genre. It’s soap opera at its finest, full of scheming villains, scorned women, even an evil twin brother thrown in for good measure. The basic gist of it is this: Jane Villanueva, a 23-year-old Latina virgin, is accidentally inseminated by a distracted gynecologist. The baby’s biological father is Rafael, who owns the hotel where Jane works and whom she’s secretly crushed on for years–oh, and who Jane’s detective fiancé, Michael, is investigating for murder. Oh, and the gynecologist is Rafael’s sister. Oh, and Rafael’s evil ex-wife Petra wants to claim the baby. OH, and Jane just discovered that her own biological father is the world’s most famous telenovela star, played by real-life telenovela superstar Jaime Camil. Who is also dating her mother. OH, and–you know what, that’s enough plot synopsis for this review. For now.

What makes Jane the Virgin brilliant–and on a more basic note, remotely accessible–is that no matter how far flung and fantastical the plot may become, the characters and their relationships are always deeply rooted in reality. Is Jane’s virgin-motherhood ridiculous? Absolutely, but the way in which she reacts to her absurd situations is not. This is credited in part to a writing team that has a deep understanding of human interaction and emotion, and in even larger part to actress Gina Rodriguez, who is nothing short of stunning at every turn. Genuine, agile, and possessing of a radiant beauty that’s just girl-next-door enough to be relatable instead of enviable, Rodriguez is without a doubt the breakout star of the year.

“Virgin” doesn’t even begin to cover it.

With all of this plot to juggle, it is crucial for Jane to focus on its longform serial storytelling, and it manages this formidable task with a surprisingly light touch. It accomplishes this with the most tried and true of storytelling vehicles: a voiceover narrator. And no, it’s not Jane, thank God–while she might have been the obvious choice, Carrie Bradshaw-esque musings would have pushed this show into intolerable chick-flick territory. No, we are treated instead to an omnipotent, omnipresent “Latin Lover,” voiced by Anthony Mendez, whose commentary is both necessary and thoroughly enjoyable. His job is to remind of us not just of the various strands of plot, but of the emotional status of all of the characters, and he does so with infectious and comical enthusiasm. The “Latin Lover” trope does double duty, paying homage to the show’s telenovela roots and exploiting and parodying its already trope-heavy formatting.

Jane the Virgin also makes excellent use of on-screen text, in some of the most seamless and intuitive visual displays since Sherlock pioneered the technique. Sometimes the text reflects non-verbal conversations onscreen, but more often it serves as extra meta-commentary, the Latin Lover’s cheeky illustrative sidekick. Coupled with the production’s sunny Miami palette of pastels and florals, the result is a whimsical visual dessert.

Of course, it’s impossible to talk critically about Jane the Virgin without acknowledging that it is, at its core, 1. a show about Latin culture, and 2. a show about women. Our character centerpieces are the three women of Jane’s family: Jane herself, her mother Xiomara (Andrea Navado), and her abuela Alba (Ivonne Coll). Between the three of them, they represent both the archetypes and the reality of the lives of Latin-American women. A majority of their in-conversations take place in Spanish with English subtitles, which is particularly notable for a network like The CW, for which this choice was certainly not without risk. 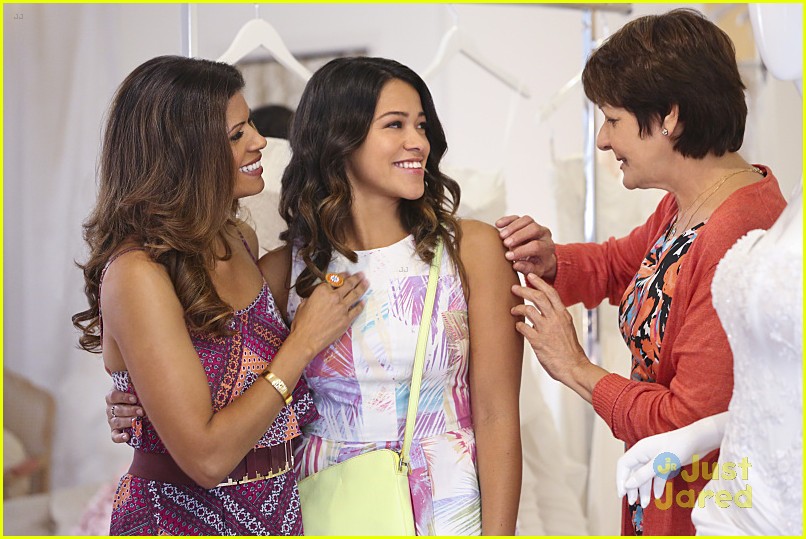 Jane the Virgin is about a virgin, yes, but it is not about virginity, necessarily. It is about the cultural and religious experiences that lead one young woman to make a decision about her body that is decidedly against the grain. Jane is not preachy about her virginity, nor is she even particularly adamant about it–we almost lose it once or twice along the way. Nor is she ostracized for it: in fact, she’s caught between two gorgeous men (Brett Dier as Michael and Justin Baldoni as Rafael). Despite it’s title, this show is very sexual and very open about its sexuality, both in terms of its leading lady and the steaming side-doings of those around her. If you think “pregnant virgin” seems like a limiting plotline, don’t worry: Jane the Virgin is stuffed with so many exciting social, cultural, religious, and sexual side alleys to explore, I can’t imagine it will ever run out of stories to tell.

Jane the Virgin is frothy, it’s light, it’s full of love triangles and comical misunderstandings and on-screen hashtags, but it is also Very Fucking Good Television. Bring on the crazy, Jane the Virgin, and let’s hope the world is smart enough to get on board.

Jane the Virgin returns from winter break on Monday, January 19th at 9pm/8c.