Deadshirt Is Watching…is a weekly feature in which Deadshirt staff, contributors, and guests sound off on the television shows we’re tuned into, from intense dramas to clever sitcoms to the most insane reality shows. This week: Game of Thrones, Silicon Valley, and Community! Season Five has been a whirlwind; the events this episode put us nearly halfway through books four and five (which occur simultaneously). The derivations from the original manuscript are starting to increase, but I think it’s the right move for the show overall. The plot has been efficiently pared down to necessary action and characterization. It feels almost too fast in comparison to the slow build of the last few seasons, but the new pace makes it feel like the writers might end up surpassing author George R.R. Martin’s publishing progress by the end of this season.

Roose and Ramsay Bolton’s relationship is explored a little deeper over a humiliating dinner for Sansa. Despite the fact that they are both complete psychopaths, Roose claiming Ramsay as a son and not just an heir feels meaningful, especially in light of Jon Snow’s choice to remain a bastard and a Crow in the line of duty last week. Back on The Wall, the young Lord Commander of the Night’s Watch shows premature wisdom yet again as he pleads for Tormund Giantsbane to worry less about his honor and more about the fate of his fellow wildings.

Tyrion and Ser Jorah shed light on the Doom of ancient Valyria as they glide through its eerie, misty ruins beneath the shadow of Daenerys’ truant dragon. When they are ambushed by the Stone Men—those inflicted by the insanity and eventual full-body calcification of highly infectious Greyscale disease—neither escapes fully unscathed. While it’s the last scene of the episode, thankfully, their survival is not left as an ambiguous cliff-hanger, although you could tell the writers were tempted to leave it with Tyrion plunging into the depths.

After the fall of Ser Barristan last episode, Daenerys seems to regain her domineering spirit. Having forged her way across nations with an army, we forget that despite being a total badass and naturally intuitive about claiming power, she’s also a young woman with little experience in politics. She rounds up the rulers of the Meerenese families as dragon-fodder to make an example, and later makes an interesting proposal to smarmy coward Hizdahr Zo Loraq.

Oh good, now we have two more weddings to look forward to. Those always turn out splendid.

Episode Highlight: A few tender moments I’m sure will bite me in the ass for caring later: Ser Davos and Shireen’s playful banter as Stannis’ army departs The Wall, and Missandei and Grey Worm sharing a tender kiss. 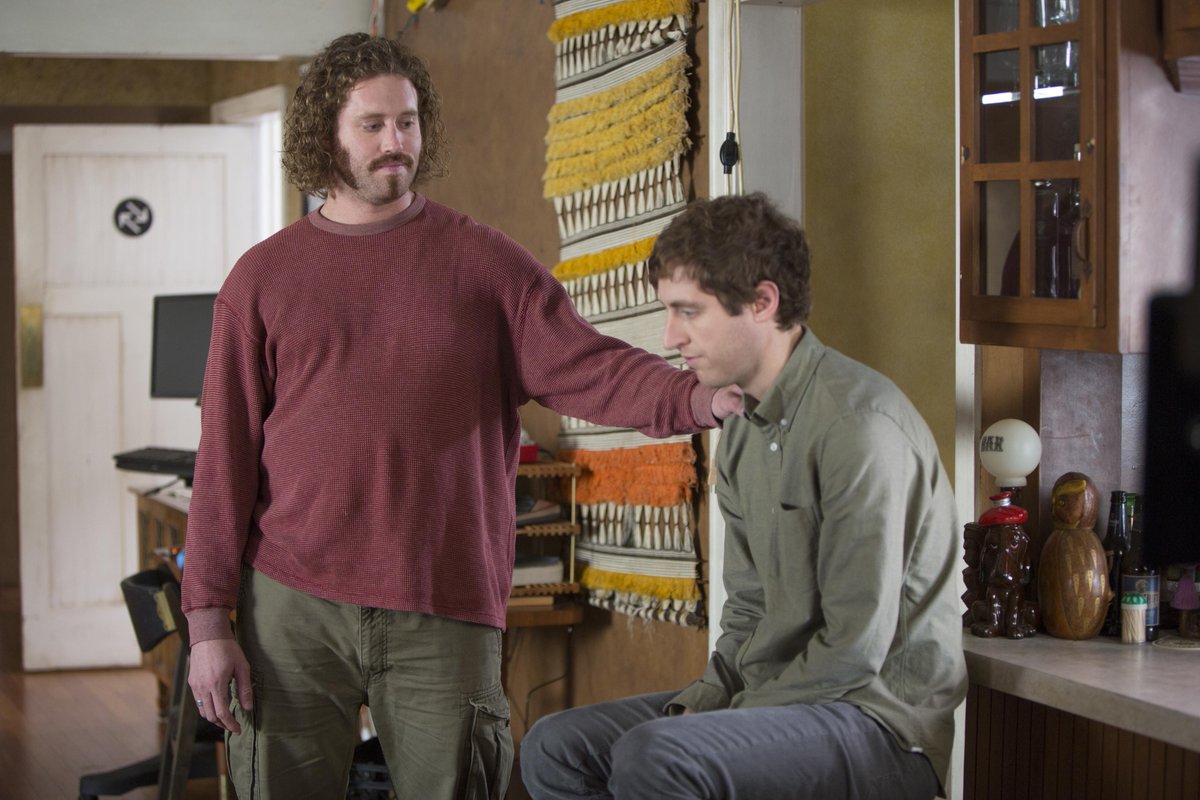 Silicon Valley is so good, you guys. So damn good. HBO Sundays are better than you. Yes, specifically you.

Gavin’s pull with server companies essentially blackballs Pied Piper from using them, but Gilfoyle determines that it would be more efficient to build their own servers anyway—at the expense of paying for office space outside of Erlich’s house. The Pied Piper crew must also deal with a picky wheelchair-bound neighbor who doesn’t want them bringing down the value of their “kids and pets” friendly community. Meanwhile, at Hooli, Gavin continues to push Big Head as the “co-creator of Pied Piper” to beef up his chances at successful litigation, even though Big Head is happier making potato cannons than being “Head Dreamer” of Hooli XYZ. Throw in a few recurring gags about night sweats/bedwetting, a Bitcoin rig, and Jared sleeping in a garage, and you’ve got yourself a completely satisfying episode top-to-bottom.

Perhaps the shows biggest strength—outside of solid writing and storytelling—is its ability to convince me that every character knows exactly what they are talking about. Even though many of the faces on the show are familiar (Martin Starr and Kumail Nanjiani in particular are far from unknowns) for 30 minutes every week, I’m convinced that each of them understands code. Erlich’s antics alone could keep me watching this, but the fact that I 100% believe in each of these characters and their abilities is a testament to how strong a show this is.

The recurring bits of the show—Erlich being a jerk all episode before coming back with some solid wisdom at  the end, Gilfoyle screwing with Dinesh, and Richard doing his best just to keep some modicum of order—are present and strong as ever.

Episode Highlight: A monkey gets a robot arm. It does what monkeys do with or without robot arms while the man who built the arm tries to justify it.

Community
Season 6, Episode 9: “Grifting 101”
Tuesdays at “whenever the fuck you feel like” on the Yahoo Screen app Series creator Dan Harmon came back and Yahoo helped Community fans realize the “six seasons” of the “& a movie” maxim and no one seems to really give a fuck. Community is as funny, insightful and well-executed as ever, but this season is being treated like a chuckle-filled pity fuck the general populace would rather ignore than give a real chance. Admittedly, the Yahoo Screen era can be characterized by indulgence, episode length padding and a general feeling of noncanonical unimportance, but it’s still more enjoyable than most comedies on traditional airwaves. It’s as though the fandom can only invest in the show if it’s teetering on the edge of cancellation, like a couple that can only climax after copulating in public.

This past week’s episode has all the hallmarks that made the show such a cult favorite: the hyperspecific pop culture references, the labyrinthian dialogue structure, and the flagrant disrespect for the fourth wall. Brit comedy favorite Matt Berry guests as a professor teaching a class on grifting that’s so blatantly set up as a grift that only Jeff seems divorced from the proceedings enough to call it out. The writers use this as a springboard to skewer the entire conman movie genre in general and Paul Newman’s The Sting in particular, a target they save their sharpest darts for. Every trope and motif is torn apart and put back together like a jigsaw puzzle, which would be a laughably easy structure for the show if it wasn’t so well suited to the deeper character building this season has fostered. Chang continues to be better utilized than ever while Abed gleefully vacates his role as the resident weirdo. At this point in the game, the show may feel like autopilot, but we’ve spent a lot of time with the characters, and it feels like all the zany twists and turns that comprise their lives have left a lasting impact on everyone (especially Jeff).

Newcomers Paget Brewster and Keith David are a godsend, standing in as the newbies who are as baffled by the show’s continuity as any prospective new viewers might be, all the while strengthening the remaining cast members through contrast. Some of the vitriol aimed at con movies rings a little hollow, given the kinds of films the show has lionized in the past, but the ensemble handles the turns and nesting doll gags so well it’s hard to care.

Episode Highlight: We finally made it to the sixth season, you fucks, so start watching it.