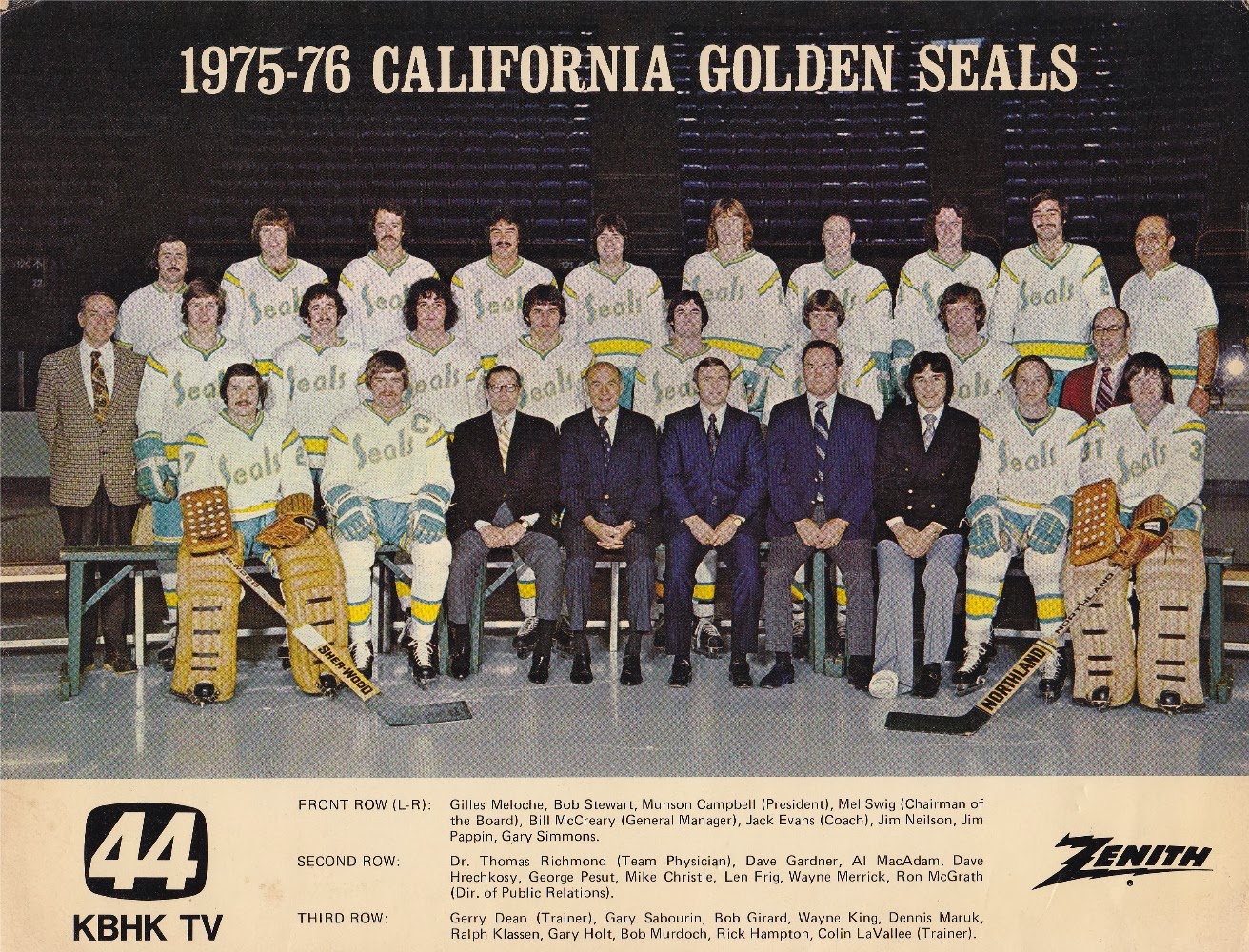 The California Golden Seals hockey team haven’t existed since 1976. That doesn’t mean documentary filmmaker Mark Greczmiel (pronounced Gretch-mal) loves them any less. Even in a league as obsessed with history as the NHL, the Golden Seals are often forgotten. Greczmiel set out to right that wrong, and is currently producing a documentary on the franchise.

The Seals were never a particularly good team—in their ninth season in California under the NHL banner, they went 182-401-115 (that last column is “ties,” an archaic concept in today’s NHL) and only made the playoffs twice, at which point they never passed the first round—but they were always fun, on and off the ice. A group of misfits plagued by poor ownership like the Seals have a story worth telling, and Greczmiel took to crowd-funding and raised over $9,000, though he’s still accepting donations. To help promote the film, he’s uploaded some of the rough cuts from the upcoming documentary to offer a sense of how much of an oddball franchise this was:

Deadshirt’s resident hockey fanatic David Lebovitz held a phone interview with Greczmiel, in which they discussed the Seals, why we need a documentary about them, and that time the team paid a streaker.

DL: What is your background in media?

MG: I worked in TV news for 20 years, and part of that time I was an entertainment reporter, so I would do celebrity interviews. Since 2000, I lived in Los Angeles and worked in documentaries. I did 25 episodes of True Hollywood Story for E!. Now I work freelance, and I do documentaries and specials for a variety of different outlets.

DL: How did you land on doing a documentary about the Golden Seals, of all teams?

MG: I grew up in the San Francisco Bay Area, and my dad would take [me and] my brothers to a lot of hockey games there, so we became big fans. I went to games throughout the nine seasons in Oakland.

MG: Oh, there are a lot. The very first game we went to against the Toronto Maple Leafs, a puck got shot into the crowd. Now they have nets around the ends, but my older brother caught a puck that first game, which was fun. We still have that. Then I was at a game where they had a streaker. Back in the seventies, college students were doing a lot of streaking on campus. The Seals didn’t have a big advertising budget to promote the team, so they were doing anything they could to get people to notice. I found this out later when I interviewed their PR guy, but they had paid the girlfriend of the stick boy to crawl under the stands and come out by the benches totally naked except for her ice skates.

They had let the photographers know, “Oh, you should stand here in the corners, you might get a good shot of something.” So she came skating out and everybody was screaming and yelling. She had a big smile, she skated across the ice, and then out the corner, and they got a huge amount of publicity. I remember because I didn’t actually see it—I had gone down to ice level to see the players come out the tunnel, and I heard all the screaming, and when I came up they explained what happened. I got to see the girl: she was sitting there in a big fake fur coat with the cheerleader, Krazy George Henderson [a noted professional cheerleader and alleged inventor of the wave], talking with her. She was a minor celebrity there for a couple of days and the team got a lot of publicity out of it.

DL: This team has been described as something of a real life Slap Shot, or maybe a real life Major League.

MG: One person said “this is a franchise where if anything could go wrong, it did go wrong.” For the most part, they had bad ownership, they had people with big egos. Some of them didn’t know what they were doing. They had some very talented people who were forced out that would go on to other franchises and do incredibly. There’s a guy named Bill Torrey who was head of hockey operations there ,and he was forced out by Charles Finley, the new owner. Bill Torrey went to Long Island and created the dynasty with the New York Islanders and won a number of Stanley Cups.

DL: I thought that name sounded familiar! But besides being a fan, what was it that made you sit down and think “I’ve got to do a documentary on these guys?”

MG: Well, I always thought they were fascinating. They were very colorful. They’re kind of an oddity in the NHL because when they NHL expanded, there were only two teams west of Chicago and St. Louis [note: the other was the Los Angeles Kings], so they were a bit of an oddity being in California. And then, when during the winter the players would come out west and there was nice weather, it was a real surprise for them. Then when Charles Finley, who owned the Oakland A’s, bought them, and he dressed them in the white skates and green and yellow uniforms, people really paid attention to them. They were never really good—they would always be on the verge or getting good or getting better, and Seals management would make some really bad decision and the team would have to start all over again.

I wanted to do it because I was a fan growing up, and early in my TV career I did a couple stories about the team. I started my TV career up in Edmonton. The Seals’ booster club (this was ten years after the team had left) had come up to Edmonton to see Wayne Gretzky, so I did a story about their visit to Edmonton. I was always a big hockey fan, and I did stories about the San Jose Sharks when they started in 1991. I always thought, “somebody should really do a documentary about this,” so I decided last summer, in between my freelance gigs, [to] start working on this. So I’ve been doing it on a microbudget. Normally when we do a shoot you go with a full crew with a lightning person and everything, so basically I just took my camera gear, my lighting kit, my audio kit, and traveled across the US and Canada to interview about thirty former players, coaches, team officials, and fans.

DL: Any particular team allegiances for you now, out of curiosity?

MG: Being originally from the Bay Area, I still have a lot of affection for the Sharks. The Sharks are actually very good to me—you can’t tell the story about the Seals without telling the story about the Sharks. I went up to San Jose, shot some footage there, did some interviews with a couple of players. Since I live in LA, I default to the Kings after that. Right now I’m a Ducks fan. (Laughs)

DL: I think a lot of us are Ducks fans. I’m a Devils fan, and whoever beats the Rangers I’m good with. How aware/helpful has the NHL been with this?

MG: They’ve been very good. I need to license the information to use images of NHL teams and things, so I spoke with their licensing people and they’ve been very good. They gave me permission to use the NHL images for the fundraising campaign. The next step is that they’d like to see the script and everything, which is kind of normal. The NFL, Major League Baseball, the NBA, they all do that. They don’t want you to trash the league while you’re doing a story. They don’t really have anything to worry about—this documentary is one of affection about this team and what they went through. The problems the Seals had didn’t have so much to do with the NHL as they did with the ownership they had.

MG: It’s a great hockey story a lot of people aren’t aware of. Also, the Seals were trendsetters in a lot of ways. They were the first team to put names on the back of the jerseys. That hadn’t been done before, and that met with a lot of resistance because other cities felt that would affect their program sales. There were a couple of cities—I think Chicago and Detroit—where the Seals had to wear uniforms without the names on the back of the jerseys. It wasn’t terribly forward-thinking of the other teams.