Listen Here is a monthly playlist picked and curated by members of the Deadshirt staff around a certain theme. This month’s theme is Early Autumn, with a playlist selected by Mike Duquette. 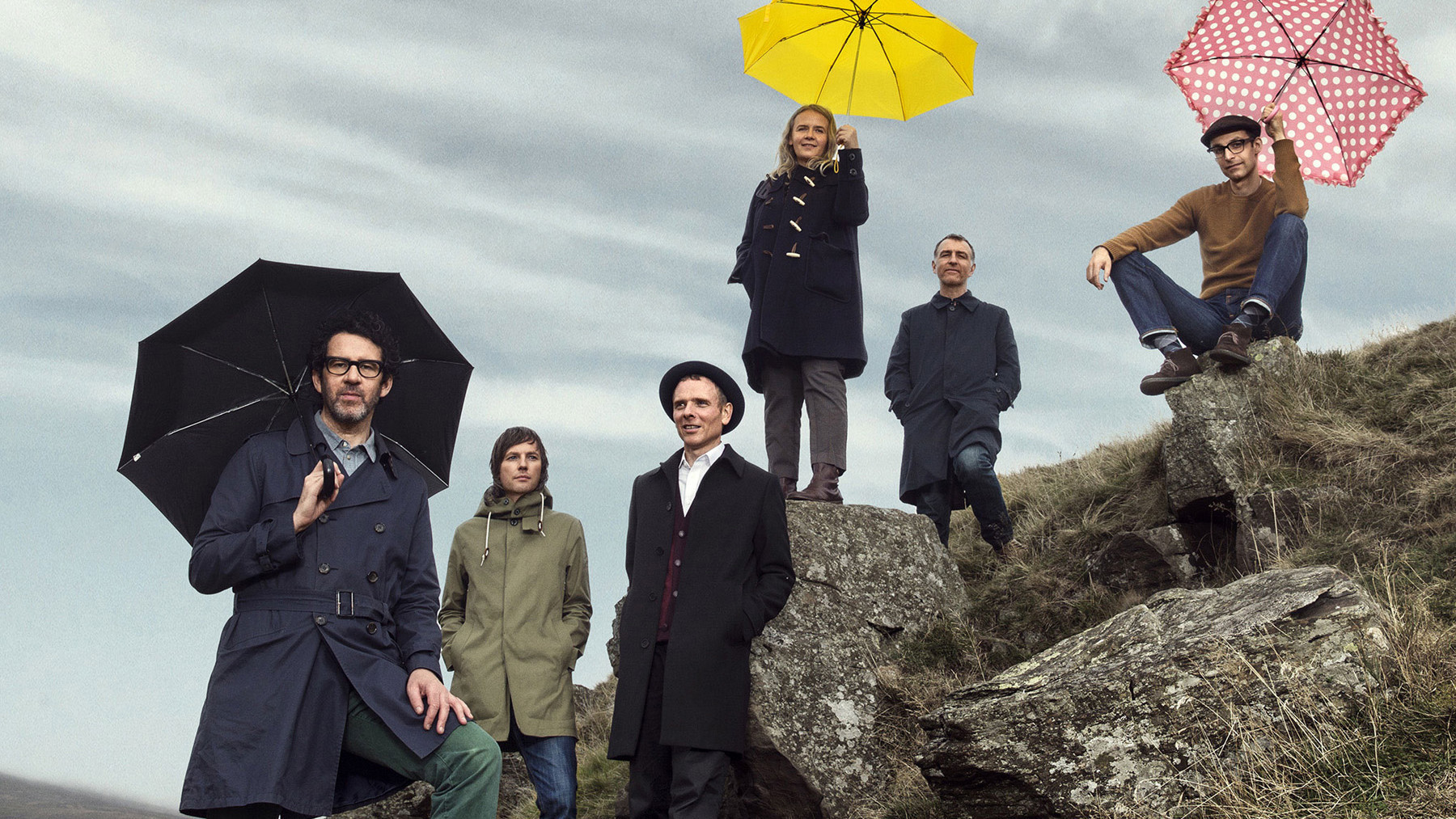 Belle and Sebastian dressed for the weather

I’ve lived in my first apartment a whole year as of September 6, so, more than the scholastic connotations, I think I’ll always associate the month with a sense of newness. Even though the trees outside are going to start emptying, and we’ll have to put on more layers (which rules, mind you), it’s a time to busy oneself with new things and exciting experiences. With any luck, this playlist—heavily tailored to my own experience as it is—will provide a nice soundtrack to doing just that.

“The Other Side of Summer” – Elvis Costello (Warner Bros., 1991)
But first, here’s to the summer that was, or the summer that wasn’t: a cheeky Beach Boys pastiche paired with one of the most biting screeds of Elvis Costello’s lengthy career. Elvis puts everything from John Lennon to the environment on blast here, and the result is cynical bliss. Not bad for a guy who, at the time, looked extremely homeless.

“September” – Earth, Wind & Fire  (ARC/Columbia, 1978)
You’re nuts if you think I’m going to do an autumn playlist and not include this. On some days, “September” is in my top three songs; on others, never mind number one, it’s number zero. It’s a seven course meal of a song—every moving part, from Maurice White’s verses and Philip Bailey’s falsetto choruses to Verdine White’s mighty bass and the high-stepping blasts of the Phenix Horns, would work as its own melody, and instead EWF put it all together for you to enjoy well beyond the 21st night of you-know-when.

“Crazy Love” – Van Morrison (Warner Bros., 1970)
Van the Man’s been in the news a lot lately. He just turned 70, and Legacy Recordings [Editor’s note: Mike Duquette actually works for Legacy, so this is him bragging here] just made a boatload of his albums available digitally for the first time in years. As such, I’ve been slowly immersing myself in Morrison’s catalog. My journey’s still early—I’m only in the tier of songs that are recognizable but unsullied by classic rock radio—but I was struck by this romantic lazy river of a tune.

“Amelia Bright” – Ben Folds Five (Epic, rec. 2000/rel. 2011)
Ben Folds’ new album—a chamber-pop record with a young orchestral ensemble—is another stumble in the alt-rock pianist’s decline into aggressive mediocrity. So it’s important to remember the good times, like this little gem written by Ben Folds Five drummer Darren Jessee for the band’s aborted fourth album. (I remember downloading a live bootleg version of this song in my senior year of high school, and was blown away when a studio version was released years later.) It’s rough around the edges, but had producer Mitch Easter been able to give it a final polish for a released album, it’s possible Ben Folds Five would’ve hit some other alternative nerve, preventing the existence of an album where Folds literally makes an “f’d in the a with a d” joke over the same notes on the chromatic scale.

“i” – Kendrick Lamar  (Top Dawg/Aftermath/Interscope, 2014)
The only misstep of To Pimp a Butterfly was omitting the original single version of Kendrick’s hypermotivational “i,” a cleaner, more frenetic take that expertly pairs the Compton-born rapper’s flow with a dazzling interpolation of The Isley Brothers’ “That Lady.” Sometimes it’s harder to get out of bed and face the day when you’re contending with cooler temperatures and less natural light; put this song on and that’ll change. “I love myself,” indeed.

“Silent Running” – Mike + The Mechanics (Atlantic, 1985)
Like many late twentysomething men, I like to brood ridiculously from time to time. Unlike many late twentysomething men, I do my brooding to a cosmopolitan synth-slither by the weirdest Genesis side project (Phil Collins doesn’t count) and sung by the guy who sang Squeeze’s “Tempted.” Six minutes of faux darkness and I’m ready to snap out of my autumnal mood and find the nearest karaoke place where I can sing this.

“September Gurls” – Big Star (Ardent, 1974)
Another one of those “no duh, it’s autumn” tracks, but what a tune. I don’t know what it says about my bona fides that a) I discovered Big Star relatively late in life (i.e.: barely out of college), or b) I discovered “September Gurls” specifically through the Bangles’ 1986 cover. Rip up my music geek card if you want, I’ll probably print another.

“Mandy” – Barry Manilow (Bell, 1974)
My mother’s birthday is in September, and I love her with all my being, as is appropriate. That also means I’ve gone from forgiving her weird adult-contemporary taste in music to outright embracing it. Seriously—I’ve seen Barry Manilow in concert with her maybe four times. I’m always the youngest heterosexual male there, and last time, when Barry sang lovelorn deep cut “All the Time,” I started crying and reached out to squeeze my mom’s waiting hand. Try and top that, The Weeknd!

“I’ve Returned” – Squeeze (A&M, 1982)
My favorite New Wave band has a new record (their first in nearly 20 years) out this fall, and while lead single “Happy Days” is great, it’s the second time in two decades they goofed by releasing a beautiful, explicitly summer song in the wrong season. “I’ve Returned,” the jaunty album cut from 1982’s Sweets from a Stranger, is a good song regardless of season, especially as a sort of a shake-the-doldrums-off piece that we all need to experience from time to time.

“Favourite Colour” – Carly Rae Jepsen (School Boy/Interscope, 2015)
A friend of mine recently said the chorus of this song makes him want to jump on a plane and fly to Macchu Picchu. I don’t know that I can say much about Miss Jepsen’s E•MO•TION that others haven’t already said way more intelligently, suffice it to say that this is a record so sweet and fun that even deluxe edition tracks like this one have killer hooks. Imagine having that kind of a surplus in your life!

“Harmour Love” – Syreeta (Motown, 1977)
Our double shot of big-grin love comes from one Syreeta Wright, who bestowed upon us this little roller-rink jam with the help of her ex-husband and Motown’s crown jewel, Stevie Wonder, who wrote and produced the track. For a couple who’d been divorced for five years at that point, Syreeta and Stevie paint quite the picture of easy, breezy love, and you and your potential sweetheart are all the better for it as love turns to autumn.

“Pieces of the Night” – Gin Blossoms (A&M, 1992)
Perhaps more than any other season, fall is my time for simultaneously bright and melancholy pop/rock. I’m talking Big Star, R.E.M., or the makers of one of my favorite albums of the ’90s, the Gin Blossoms. 1992’s New Miserable Experience is absurdly perfect (the best songs written by guitarist Doug Hopkins, whose alcoholism led to his firing and suicide just as the band was starting to break—a fact that adds to the absurdity). “Pieces of the Night,” the album’s penultimate tune, captures that bittersweet early fall feeling as adroitly as one can.

“Love…Thy Will Be Done” – Martika (Columbia, 1991)
I’m going to two weddings in September (I suppose it’s that time of my life), and it as always reminds me of one of my favorite love songs, an almost-Top 10 hit sung by the pop star who sang “Toy Soldiers” and co-written by Prince. Will I dance to this at my wedding? Who knows, but I’m dancing to it now.

“Satellite” – Dave Matthews Band (RCA, 1994)
And right after that wedding, I’m going to my high school class’ ten-year reunion. I’m a glutton for punishment! And so I share a song that weirdly meant a lot to me in high school, as a nerdy chorus kid who’d somehow gotten this song as a solo in a concert. Moments like that seem quaint now, but they were also the tipping point for how I’ve made music “a thing” in my life since then—a topic I’m sure to bore my former classmates with at the end of the month.

“Leave a Trace” – CHVRCHES (Glassnote, 2015)
There’s been, I think, a fair share of newer music on here, and CHVRCHES’ forthcoming sophomore album is poised to be a musical highlight of my month. “Leave a Trace,” with an appealingly beepy melody from lead singer Lauren Mayberry (hear how she turns “told” into a three-syllable word on the second pre-chorus), is a strong candidate for Song of the Year. May Every Open Eye contain multitudes of tunes evoking sad computers that learn how to love.

“leaves” – Miguel (Bystorm/RCA, 2015)
And we close our autumnal odyssey with another great, on-the-nose track from this year, from Miguel’s incredible sophomore album. This is definitely a sun-blinding-you-in-the-rearview sort of track (Miguel loves California, you guys), but maybe one last blast of that waning summer energy before we get into peacoat and pumpkin spice season can’t do too much harm.

That’s Deadshirt’s hand-picked “Fall” Songs playlist – now, you tell us what songs you associate with the Autumn season. Comment below or hit us up on Facebook or Twitter!