For the Game of Thrones generation, the idea of a genre TV series that wraps all of its plots up within a half hour is borderline unthinkable. Or, it would be, if The Twilight Zone didn’t get a cable marathon on an increasing number of holidays. While The Twilight Zone seems to be presenting a bunch (156, to be precise) of unconnected stories, there are some thematic common threads. This summer marks the 52nd anniversary of the airing of the show’s final episode: Let’s talk about What We Talk About When We Talk About The Twilight Zone in Dowsing Rod.

Let’s start by talking about the topic that makes me so much fun at parties: death. Or, more specifically, death personified, as it is in The Twilight Zone’s (arguably) only recurring character, Mr. Death, and in the hitchhiker in the startlingly named episode “The Hitch-Hiker.”

In “One for the Angels” Mr. Death (right) considers a loud tie, “Prim Reaper” business cards.

Mr. Death makes his debut in the show’s second episode, “One for the Angels.” Portrayed here by Murray Hamilton, or, as you may know him, The Mayor from Jaws, Mr. Death comes off like a high-level bureaucrat. Exceedingly officious and well-coiffed, Mr. Death appears to an aging, down-on-his-luck pitchman to schedule his imminent passing. This version places Death in, while not quite an adversarial role, but sort of in a boss-you-hate position. You can score some points on him – by striking a deal to forestall your death until after you’ve made a world-shaking pitch, for instance – but in the end, he’s going to get his way. In this case, the protagonist stops stalling and completes his “one for the angels” pitch, fulfilling a lifelong dream, saving a young girl’s life, and willingly accepting his own end.

In the third season, a smoldering young Robert Redford takes on the mantle of Mr. Death, which really adds a dimension to all those “take me now” thoughts the actor inspires. In “Nothing in the Dark,” Redford is introduced as a cop injured just outside an old shut-in’s window. He begs her to help him, and after some debate, she reluctantly agrees, eventually opening up that she’s seen Mr. Death all over, with many different faces, and she’s begun avoiding going outside entirely in order to try to give him the slip. This iteration of Mr. Death works hard to reassure and comfort his intended, to ease their passing. Damn. This is like Matthew Lewis’s puberty all over again.

Meanwhile, joining Hamilton-Death (not to be confused with Aaron Burr [I’m sorry]) in the first season is the hitchhiker (Leonard Strong) who follows a young woman on her cross-country drive after a serious car accident. By the end of the episode, it becomes apparent the young woman died in that crash, and the hitchhiker is implacable Death, waiting for her to come to terms with her own demise.

While each of these versions of Death, and the plots around them, is quite distinct, the takeaways are nearly identical. Whether it’s Hamilton’s clipped tones chiding about his schedule, Redford’s beckoning hand, or the hitchhiker’s iconic “I believe you’re going my way,” each Death’s raison d’être is squarely in the camp of ensuring an easy, comfortable, even welcome transition.

Serling, it would seem, views death as a part of life, one that can be accepted with grace. Each episode contains references to death’s inevitability, from the developer’s “all these buildings have got to come down” in “Nothing in the Dark” to Nan’s “no matter how far I travel or how fast I go, he’s ahead of me” in “The Hitch-Hiker.” While saying death is inevitable certainly isn’t groundbreaking, consistently approaching that statement with narrative serenity is. 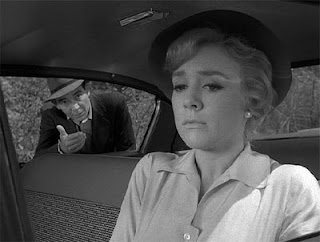 OK, maybe there are more comforting ways of handling this.

The message in each of these episodes seems to be: don’t rage against the dying of the light, because there’s nothing in the dark to fear. “One for the Angels” and “Nothing in the Dark” take the philosophizing a step further, pointing out that allowing the fear of death to keep you from living your best life, which necessarily includes taking risks and connecting with and caring for others, is short-sighted. The road’s going to end sometime, so why not keep driving, feel the wind in your hair? Go outside; meet some people! You just might run into Robert Redford, and he may not even be there to kill you.