Deadshirt Is Watching…is a weekly feature in which Deadshirt staff, contributors, and guests sound off on the television shows we’re tuned into, from intense dramas to clever sitcoms to the most insane reality shows. This week: Knock Knock Live and The Strain!

“A few months ago, when I heard about idea for this show, I said, “Wait a minute. It’s about giving away stuff? To people across the country? And it’s live on television? I’m in! So, here we are to do it.” – actual opening words of Ryan Seacrest, host of Knock Knock Live

Here at Deadshirt, we don’t like to snark. We’re positive people, and we believe that the best reviews come from a place of sincerity, not cynicism. But for this particular digest, where we weigh in on what we’ve watched each week, sometimes we just watch bad things. Sometimes we watch Knock Knock Live. And when we do, we have a duty to tell you how bad it is.

The best way to describe Knock Knock Live would be to imagine watching American Idol, but with only the filler blurbs between the singing. And it’s live, so tack on an additional 20 minutes worth of stressful waiting while technical difficulties get sorted out. (In those interims, which occur about every four minutes and last up to thirty seconds, the camera cuts to Ryan’s smiling, obviously panicked face.) At least the most compelling parts of the show—when families in need are delivered cash and prizes from the likes of Common and David Beckham—are pre-taped.

Of course, the live “surprise knocks” are bullshit, too. You’re telling me that this family has NO IDEA they’re about to be on live TV, even though you’re actively showing me footage of the 60 crew members outside their home, which is taken from the helicopter flying overhead, next to the motherfucking Goodyear Blimp? And yet Kellie Pickler is standing there with a microphone saying, “Gosh, I just hope they’re home!”

And the prizes? Well, if watching Ryan Seacrest make a bunch of low-income families literally crawl on the sidewalk for dollar bills sounds appealing, then you’ll enjoy Knock Knock Live, as well as your cozy life in the Capitol District of The Hunger Games. President Snow Ryan Seacrest continuously refers to “this season” of the show, as if it’s already an American phenomenon we should all be familiar with. But with Knock Knock Live, it seems it might actually be possible to overestimate America’s poor taste.

Episode Highlight: “This is the most fun I’ve ever had on television!” – Ryan Seacrest, professional liar. 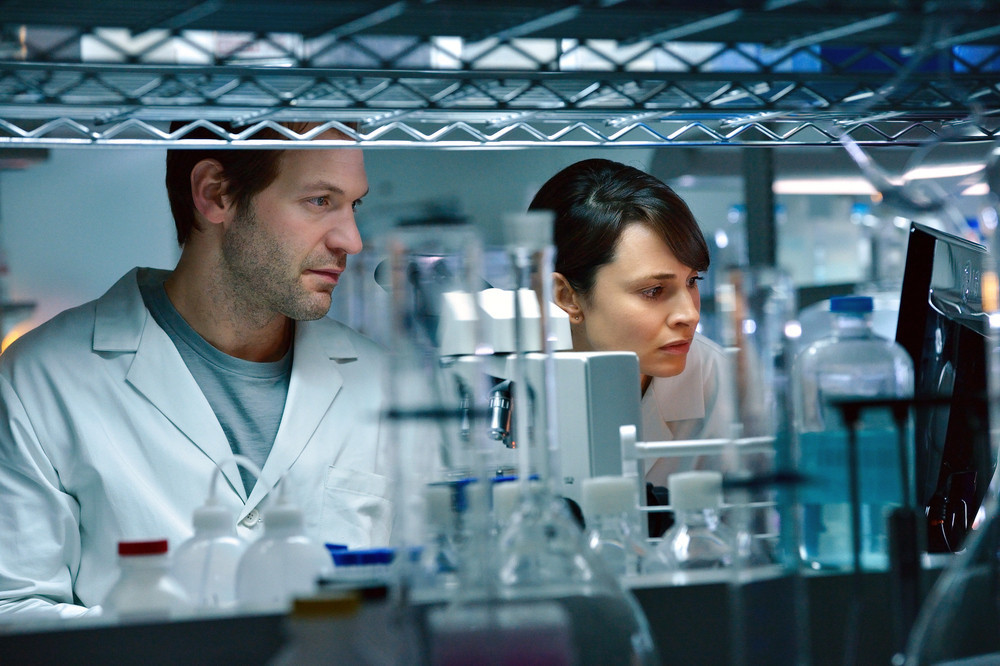 With the whole “vampire outbreak” event out of the bag, this season of The Strain doesn’t spend quite as much time spinning its wheels as it did last year. Instead, we get a sampler platter of pretty much all the key elements of the show. This week had decapitation, flashbacks, moral quandaries, Nazis, people hissing threats and insults at each other but eventually ending in a stalemate, etc. There was even an unsettling new type of vampire, and POOL SEX! This almost Game of Thrones-esque approach of broadly checking in with a number of characters and plots was better than stalling, but lacked some of the vision and focus of the show’s tighter sequences, like the convenience store standoff from season one. Still, there was plenty to like, and some of the reveals, such as the history between vampire hunter Setrakian and evil billionaire Palmer, played pretty well. The Strain isn’t the best show on television in terms of performances or writing, but it’s generally some pretty top-notch Guillermo Del Toro-style horror every week, and it doesn’t fall into the same bleak, boring ruts that The Walking Dead does.

Episode Highlight: It’s gonna be hard for anything this season to top the premiere’s gorgeous/grotesque Del Toro-directed prologue, but the blind child vampires were effectively creepy, with their animalistic gait and faces like broken dolls. Also, Fet and Dutch had sex in a pool! That pairing has been pretty obvious from the beginning, but it’s nice to see a couple of the less dour characters have fun together. And while The Strain falls into a number of horror pitfalls, “sex leads to death” doesn’t seem like its style, so hopefully we’ll continue to have those two lightening the mood for a while.