The last days of high school are upon us. Senior Prom is fast approaching. The band geeks yearn to lose their virginities, and the popular girls pine to be seen as more than pretty faces. Adults are all but invisible as an indie pop soundtrack swells over a panorama of suburban teenage ennui. And in the middle of it all, one boy chases after the girl of his dreams.

If it sounds like the plot to a John Hughes movie, that’s because Paper Towns is, in many ways, an homage to the Brat Pack capers of the eighties. But where Paper Towns finds similarities in teen movies of past decades, it is not solely a throwback, nor is it an attempt to revive the high-spirited teen romps of yore. Rather, it belongs to a new generation of teen movies, to be placed on the shelf alongside The Spectacular Now and The Perks of Being a Wallflower. Sensitive, gorgeous, and hopelessly generous toward the feelings of its young subjects (and its audience), Paper Towns, which follows closely on the heels of last year’s The Fault in our Stars, may be the movie that makes contemporary teen film synonymous not with John Hughes, but with John Green.

I had not read Green’s novel before seeing it adapted to the big screen, but I have read enough of his work to understand that his voice resonates with young audiences in a way that few other recent authors have achieved. John Green’s fan base, made up the youngest members of the Millennial Generation so often ridiculed for its self-seriousness, is both rabid and brutally sincere. Armed with Internet access, they have more information available to them than any other teens before them. They recognize their depression, ADD, anxiety and fear, for which they are often medicated. They question the rules of social politics and gender identity. If they were alive for 9/11, they don’t remember it. They commit suicide at unprecedented rates. John Green novels deal frankly with the Big Questions of Life: love, death, isolation, happiness—and do so in a way that feels immediate and human. Adapting such writing to the big screen could have proven disastrously angsty, but the past few years have taught us that in the hands of the right people, that same humanity can be just as affecting, if not more so, on film. In the case of Paper Towns, those people are writers Scott Neustadter and Michael H. Weber, the same team who penned the screenplay for The Fault in our Stars, as well as young director Jake Schreier (his only prior film is the acclaimed Robot & Frank). Together they’ve assembled a teen movie that is serious but not solemn, earnest but not trite. It is funny, poignant, goofy, and achingly sweet. It is imperfect in many ways, but its flaws do not sink it—rather, it soars on sheer depth of sincerity.

Quentin, aka Q, is our introspective, too-good-for-his-own-good leading man, who must learn to take risks if he is to win the heart of Margo, the impossibly cool and beautiful nymph played by supermodel Cara Delevingne. After showing up at Q’s window and dragging him into a night of mischief, adventure and puppy love, Margo mysteriously disappears, leaving behind only a few cryptic clues that Q dutifully follows. Joining Q in his search for Margo are his two best friends Ben and Radar (played by the equally adorable Austin Abrams and Justice Smith), Radar’s girlfriend Angela (Jaz Sinclair), and the pretty, popular Lacey (Halston Sage), Margo’s once-best friend.

The cast is nothing short of stellar. Wolff’s performance is fueled by an understated fire, and like his Fault in Our Star’s costar Ansel Elgort (who makes a cute cameo as a gas station clerk), has an easygoing confidence that will win the hearts of teen girls and their moms alike. Schreier’s willingness to just let the cameras roll as Q, Radar, and Ben laugh and banter with one another gives meaningful life to this group of friends, who have their own vocabulary, patter, and inside jokes that we are made privy to without ever being bogged down with exposition. (In one terrific scene, the boys, fighting back fear in a dark abandoned building, break into a rousing rendition of the Pokémon theme song). Q’s posse has an enviable friendship, but its members are just uncool enough to be relatable. 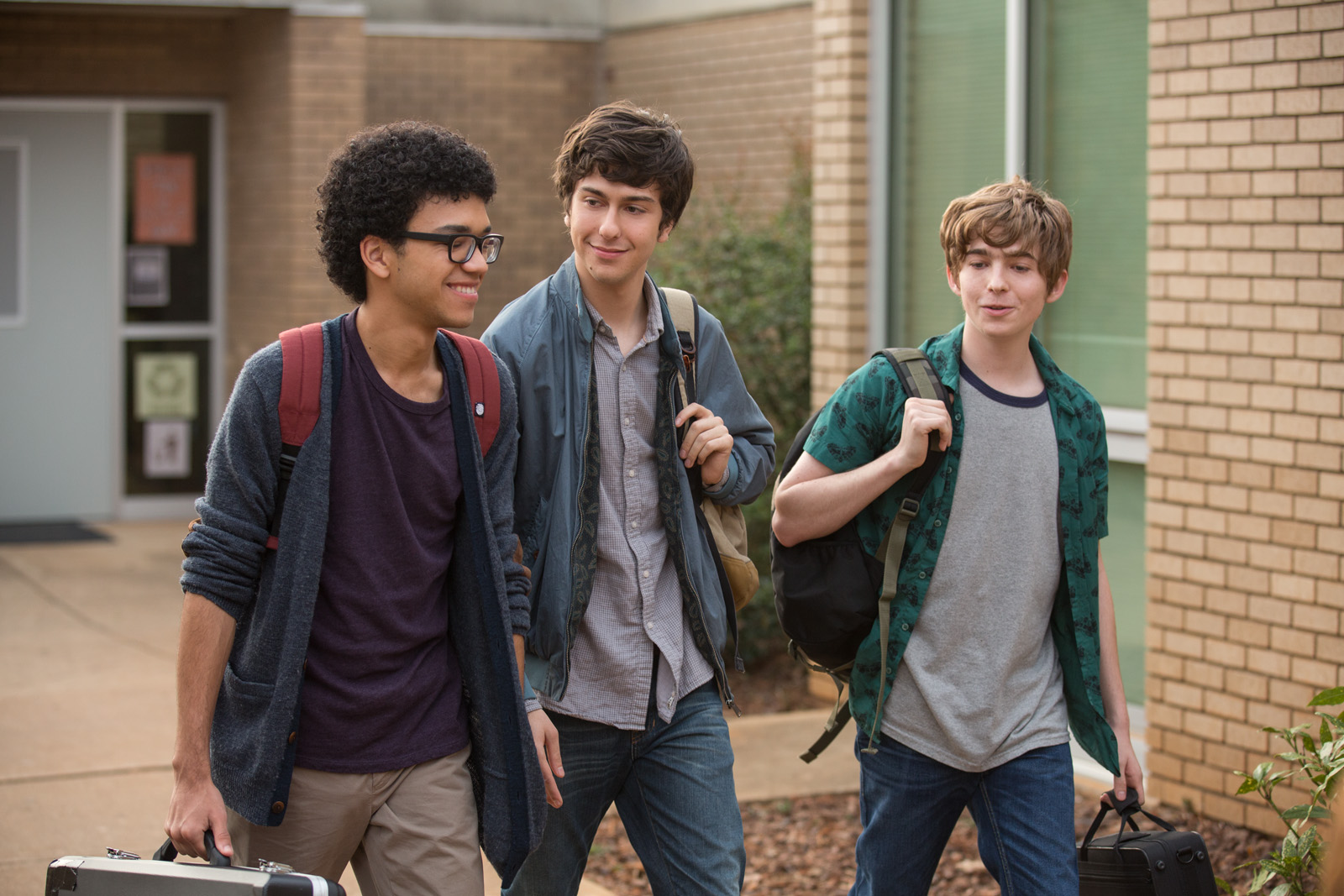 The real wild card of the film, of course, was the casting of Cara Delevingne as the elusive Margo. Putting a 22-year-old supermodel into a Manic Pixie Teen Girl role was risky at best and downright stupid at worst, but it ends up working for two reasons: 1. Delevingne, stripped of makeup and designer heels, looks hardly a day over 16, and while clearly attractive, has such an unconventional face that her role as high school It Girl AND Cool Rebel Girl is perfectly believable. And 2. 90% of Margo’s scenes happen in the first 15 minutes of the film, after which she largely disappears. The impression she makes in those 15 minutes is striking enough for us to willingly follow her trail for the rest of the film—any more and we might have grown weary of her slightly marble-mouthed, Lindsay Lohan-husky drawl. And as an added bonus for a feminist film critic, the Manic Pixie assumption actually isn’t quite right: Margo is nobody’s dream girl. In fact, she’s a pretty lousy person. The realization that Margo’s carefully crafted image is just that is the driving evolution of the film and its protagonist. Margo is a mirage onto which Q, and everybody else for that matter, has projected what they want to see. And when we finally do see Margo, the real Margo, well, let’s just say that the real magic was in Quentin all along.

One could criticize Paper Towns by pointing out that there’s never really anything at stake. Sure, there’s Q’s unrequited love, and a road trip that might not make it back in time for prom, but most of the events of the film serve to showcase its characters, not further the plot. At its core, it’s just a window on a group of kids at the tail end of kidhood, unsure about what happens next. And really, what higher stakes could there possibly be than that? What time of life is as fraught with fear and uncertainty and hope as the end of high school? Paper Towns understands this, and understands that it does not need murder or scandal or other tropes of plot to draw its audience in, because it already understands what its young audience wants: to be heard, to be seen, and to be reflected.

Paper Towns is in theaters now.