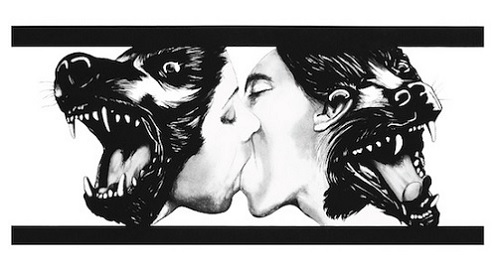 I personally love it when a band isn’t afraid to let its influences show through in the music they make. Maybe it’s because I’m a music geek and I like to see what things I can recognize, or maybe it goes back to the fact that people like music that sounds like music they already like. It’s for this reason I think, that I’ve really grown to like Holy Ghost!

Holy Ghost! is a synth-pop duo from New York. The two members, Alex Frankel and Nick Millhiser, play a number of different instruments and are pretty prolific producers. Dynamics is the band’s second album released on DFA Records, a label co-founded by LCD Soundsystem mastermind James Murphy. DFA is known for cultivating artists who are all similarly influenced by artists from the punk, new wave, disco, and electronic music genres. On Dynamics, Holy Ghost! goes above just showing off their influences and makes songs that could actually fit on some of the records they undoubtedly listened to as kids.

The first thing I ever heard or saw from this record was “Dumb Disco Ideas” and its accompanying music video, a time lapse from night to day of the band’s set-up with the New York skyline in the background. The track itself is an eight minute-long alt-dance song along the lines of an LCD Soundsystem track or even something by Talking Heads, minus the eccentricity. It has a really solid and fun groove and the melody evolves throughout it. I liked it, figured I could use more music like this in my life, so I decided to buy the album.

Dynamics starts out on pretty well, albeit a little underwhelming; the first four tracks alternate between hooky synth-pop songs, like the opener “Okay,” and LCD-influenced songs like “Dumb Disco Ideas,” which is track number two. It feels as if the whole album is going to be like this, which would be very boring. But then track five hits and everything changes. Its 80s synths, dark and powerful bass line, and an intro reminiscent of “Eminence Front” by The Who, makes “It Must Be The Weather” the coolest synth electro/synth song since Kavinsky took us around L.A. in the opening scene of Drive.

On the track “Bridge And Tunnel,” Holy Ghost! prove that they are adept at making disco hits too. From the use of a string section, to that robot voice singing backup vocals, the band dusts off some of the very best disco clichés on this song. It legitimately feels like it came right out of something from my mom’s collection of greatest hits from the 70s, but in a good way (my parents have pretty good taste.)

Another one of my favorites is the finale, “Cheap Shots.” The song starts out with a long intro of synths setting a pretty sweet groove that builds and builds, then after about a minute and a half, the drums, vocals and bass all come in and the payoff is pretty great. There’s also a guitar part that comes in after the second verse that is so reminiscent of New Order it makes my head want to explode.

Dynamics is a pretty interesting and appropriate title on several layers. Lyrically, a lot of the songs on the album focus on changing and growing up or growing old. On the sonic level a lot of the songs will have musical ideas that change and evolve, without them ever feeling like jams. But I think the most interesting dynamics are the ones from song to song. The track “I Wanna Be Your Hand” sounds like an 80s soft-rock song and fits right in between “It Must Be The Weather” and “Bridge And Tunnel.”  “In The Red,” is the penultimate track, and it is the most musically tender and beautiful song on the album, but it’s about 2 minutes long and comes right on the heels of a super cheesy, yet still very fun dance anthem “Don’t Look Down.” The inclusion of these songs and the variety on Dynamics is very interesting but I think the placement of the songs, especially the two softer ones, is a little curious and affects the flow of the album.

I think Dynamics by Holy Ghost! can draw comparisons to both LCD Soundsystem’s work and also to Daft Punk’s Random Access Memories. There are connections that can be made in a number of different ways but I think the one thing the three entities have in common, it’s that they all want to make you dance and they all give you a variety of styles to dance to. While Holy Ghost! doesn’t have the weirdness that LCD Soundsystem has nor are they as experimental as Daft Punk is on RAM, I think Dynamics is more accessible and immediate than either of those other two. I highly recommend giving Dynamics a spin.

One thought on “The Dynamics of Holy Ghost!”