This evening, the Good Ship HIMYM will begin her final voyage and sail off into the sunset. Millennials everywhere breathe a collective sigh of relief the likes of which has not been heard since the series finale of Lost.[1] Finally, there will be answers, conclusions, closure. Probably. How I Met Your Mother first aired in September of 2005. It has been with us longer than smartphones, Twitter, and the Tea Party movement. At the time, YouTube was just seven months old. So, it should go without saying that HIMYM is a lasting fixture upon the American sitcom landscape. While enduring and wonderfully quirky, HIMYM also boasts one of the most universally reviled protagonists in television. I am of course referring to one Ted Mosby, a main character who has worn out his welcome in the hearts and minds of most Americans. Even in light of the of the now famous “Ozymandias” episode of Breaking Bad, Team Walt is still beating Team Ted in fans.[2] A cursory Google search of “Ted Mosby Bad” revealed the following: 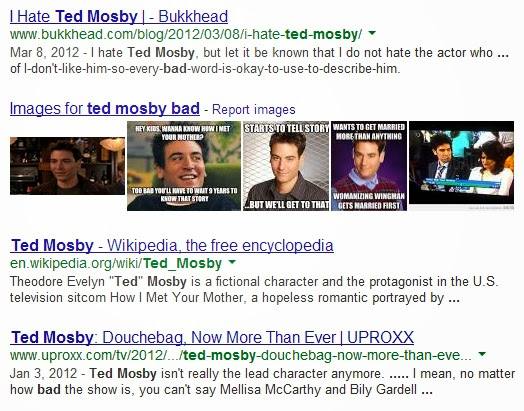 Right, but, how do you really feel?

Don’t get me wrong. I’m with you. Ted is pretty hard to deal with. He’s selfish, neurotic, and the source for a lot of his own suffering. The thing is…

I know that’s both a lot to take in and kind of a slap in the face. There you are, probably trying to stave off loneliness or boredom (both?) by flicking through things on the Internet, while some smartass makes a wild existential claim about humanity and takes your individuality to task with one broad stroke of his figurative paintbrush. If you are indeed feeling this way right now, my first reaction would be: “Have you been to the Internet before? Oh, it’s lovely this time of year! You simply MUST visit the pumpkin spice fjords over on tumblr.”[3]

“No!” You scream out in protestation, “I’m Lily! I like art, and even though I experimented with hair dye and salvia in college, I am grounded in strong values! I took a quiz on the internet that told me so. I had to futz with my cookie settings to make it work so it must be true!” Unfortunately, this mortal coil is bereft of sorting hats and most other sartorial incarnations of deus ex machina. While it’s possible to have a favorite character from HIMYM, analysis of the show’s presentation would suggest it is not possible for any of us to be analogous to any character but Ted.

While it is easy to forget, HIMYM is actually about Ted telling his kids how he met their mother; the scope of which is of Homeric proportions.[4] The tale is then portrayed by the characters in the show and guided by the narrating voice of an older, more grounded Ted-the-Dad. So, if Ted is technically narrating each episode, everything that has ever happened on HIMYM is dictated by Ted’s perception and heavily influenced by his inherent biases. Therefore, the Robin, Lily, Marshall and Barney that we know and love are actually mere facsimiles existing in Ted’s mind. We can never truly relate to any character but Ted because, they are all too far removed from their own contexts. Think back to the last time you told a story about you or one of your friends. How well did that story stack up to what actually happened? We have entire phrases in our cultural lexicon dedicated to the shortcoming of our ability to recall stories:

-You had to be there.

-And then I found five dollars.

-It was funny at the time.

Ted is the only real character. We dislike Ted because he exhibits traits that we don’t like about ourselves. In many cases, the flaws that keep Ted from happiness are the same ones that hold us back as well. Getting cold feet, being overly picky, obsessing over the unattainable, confusing friendship with love and lust— we all experience these things on a regular basis. We’re human. By the same token, we are drawn to Ted’s friends because we value their traits. It’s only natural to want to surround yourself with people who have personalities that complement your own. We like Marshall because he is earnest, goofy and a loyal friend. We all like to think of ourselves as loyal friends and some of us wish we could be more comfortable in our own skin enough to be goofy in public. So, maybe you think you’re a Marshall, but you’re not. You only value and appreciate Marshall in the same way that Ted does. You’re Ted.

What about scenes that Ted isn’t in? What about all those internal monologues? Remember, Ted is telling the story of every episode. So, scenes that he isn’t in are simply him imagining what transpired. All internal monologues are his interpretation of what was going through that person’s head. It is also important to note that women are Ted as well. The traits (good and bad) exhibited by the characters in HIMYM transcend societal gender constructs.[5] Ted is just a mirror that we have been staring into for eight seasons.

It’s important to point out that being Ted isn’t a bad thing. You have to remember that his story has a happy ending. He eventually does find the love of his life, keeps his best friends close, makes little versions of himself and moves into the house of his dreams in swanky Westchester County, New York.[6] Ted’s turns out okay. I think you will, too.

[1] When played underwater at 78 RPM, the sound is indentical to the 1997 Pacific Ocean Bloop. Science.

[2] Currently the only episode of anything in the history of ever with a perfect 10/10 score on IMDB. What? You want to discuss polling inefficiencies? In that case, may I suggest we adjourn to the study for coffee and brandy. Check your shoes for dogshit first, though. For real.

[4] God, Dad, just make a vlog and get it over with jeeeeeeez.

[6] A place that my parents fought hard to afford to move to as young adults.