This was my first NYCC and I’d only planned on going Saturday but my friend Leigh recruited me to help him work the Top Shelf Productions booth early. That mainly consisted of unpacking boxes of books, talking to con-goers and handling cash. It was like working a yard sale, but with Alan Moore books. I didn’t end up buying any comics, I did snag a 3DS from the Nintendo booth though. Come to a comic book convention, walk out with a video game system. I did get to talk to Jim Steranko and wasn’t prepared for how tiny he is in person, despite advance warning.

Spelled Leigh at the booth at a few points, spent most of the day walking around. I snagged a bunch of dollar comics, including the Power Man/Iron Fist issue with Rom I’ve been searching for for years. 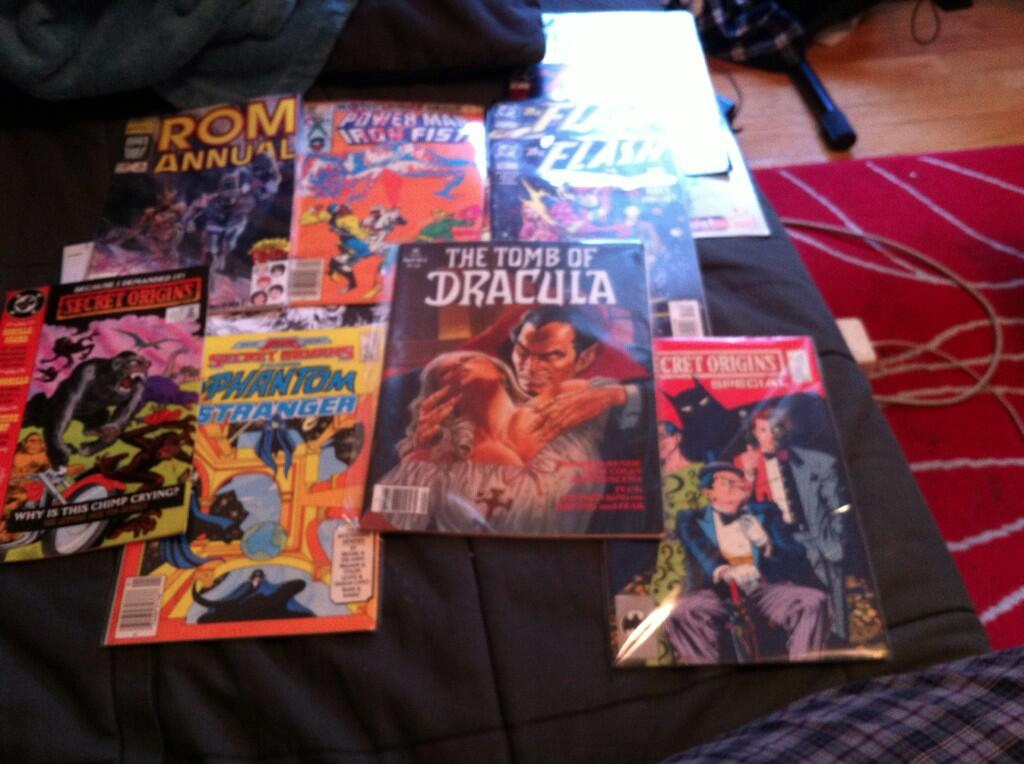 I was determined to see the Venture Brothers panel at 4pm so I sat in on the Justice League: War/DC direct to video animation panel. The DC panel felt like a lot of pandering (“Who here likes…AQUAMAN? 😉 Because we have an all-new Aquaman movie!) and unenthused fan question answers (Standard exchange: “Will we get an animated adaptation of [storyline x]?” “We’ve considered it”). I will say it was cool seeing [longtime DC animation casting director] Andrea Romano talk. 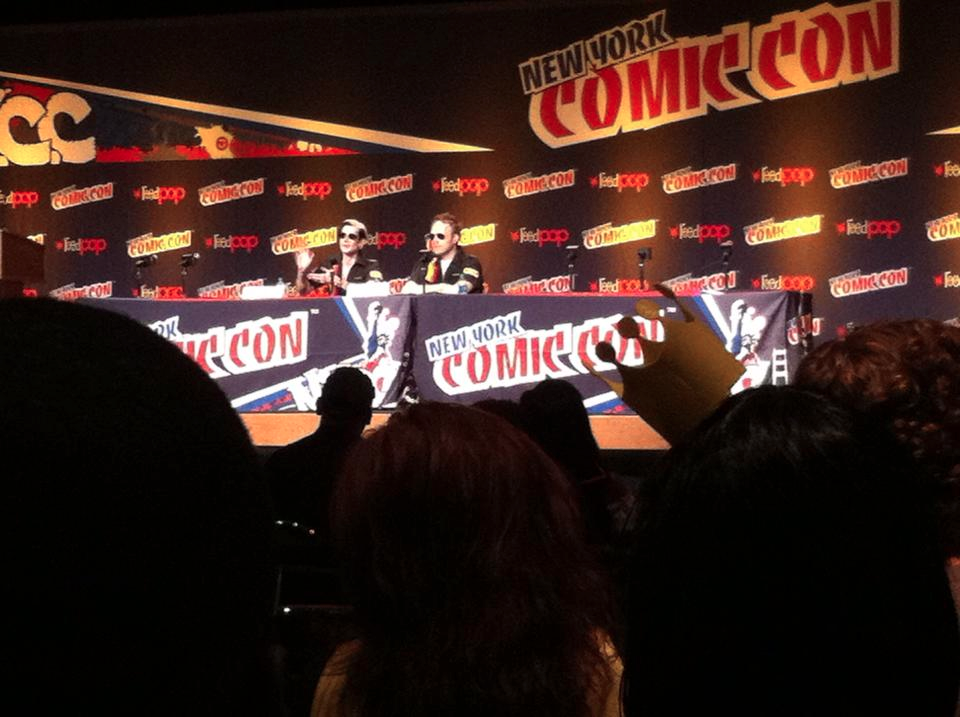 The Venture Brothers panel, on the other hand, was a blast; Doc Hammer and Jackson Publick came out to Queen’s “Princes Of The Universe” and proceeded to sarcastically half-answer questions from the internet and the audience. Their onstage chemistry was really fun to watch and it helped that they were having a good time. Highlights: Doc Hammer’s passionate defense of David Bowie, Jackson admitting he owns $60 underwear and Doc (very sweetly) swing dancing with a visibly nervous fangirl to “Greased Lightning”. I went home thoroughly exhausted.

The best part of Saturday was finally checking out Artist’s Alley, especially Chris Burnham’s original Batman Inc. pages. I bought a page from one of my favorite issues of Thunderbolts from artist Declan Shalvey and some very pretty prints of Yannick Paquette’s DC covers. 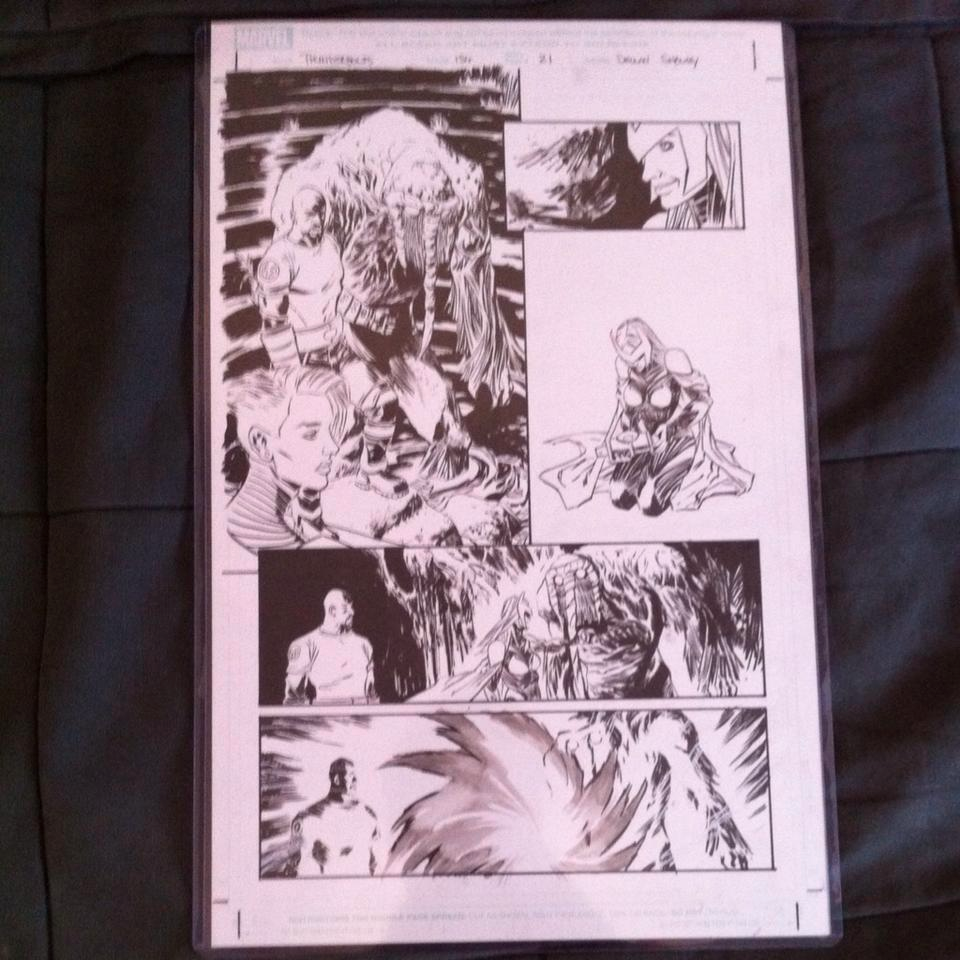 I left shortly after lunch with no regrets: I think I LIVED New York Comic Con for about three days. My feet and wallet hate me but I am rich in swag and…memories.

I didn’t expect to spend more than Saturday at the con this year but I lucked into tickets for both Thursday and Sunday and I’m not one to spit in a god’s face…or the face of my friends, as this case might be. I arrived at the con around six, having left early from my internship to rush across town with Cameron (author of our recent Mr. Freeze piece). We spent a good amount of time on the merch floor, where I admired some Iron Man Butts™. After checking out Artist’s Alley (Yanick Paquette and his French accent were the highlights), Cameron and I went to the con’s opening ceremonies. Usualy this involves a concert of some kind, but this year they decided to do something different and went with a comedy show, hosted by Brian Posehn. Posehn is currently writing Deadpool, so he definitely knew who his audience was. Baron Vaughn was the other comedian who really killed it, belting out the themes to Tailspin, Darkwing Duck, and Gummy Bears at one point. Then Janeane Garofalo started listing things and Cameron and I boogied outta there so I could catch a late train back to Jersey.

Most of Saturday was spent bumming around the merch floor and Artist’s Alley appreciating the best cosplayers the con had to offer. I was, at this point, on my quest to find a Striker Eureka action figure for my apartment, but to no avail. We searched high and low for such an object, but never once did we find it. Maybe next year. The Trash Boys kept me entertained, those scalawags. The Vertigo panel was the only panel I went to on Saturday and it was pretty decent. Mostly it was a reminder of why panels are my least favorite part of a con: they tend to be longer than they should and they reveal no new information. Though they did share new art from the upcoming Sandman series, which was pretty killer and just made me more excited for the Neil Gaiman-helmed project. And then Scott Snyder shared a sweet and funny story about his parents meeting the artist for American Vampire, Raphael Albuquerque, for the first time. Apparently a few years back, Albuquerque was in New York and ended up crashing at Snyder’s parents’ place, a kindness that Albuquerque payed back by gifting them a gory, vampire-y original piece of art. It’s been hung up in their kitchen, Snyder reported, in between watercolors of flowers in the summertime.

Saturdays are usually the most intense day. It was definitely the most crowded this year, but major events seem to have been planned out over the course of all four days, which must have been nice if you had a four day pass or just a Sunday pass. Some other things I noticed this year were the increased number of charging stations for cell phones and markedly improved cell service. Plus there was wifi! I can’t help but be pretty excited about these small, practical details. As someone who has lived her entire life on the east coast and will probably never attend San Diego Comic Con, the New York Comic Con is the biggest and most accessible celebration of all my nerdly obsessions. It’s nice seeing the con be actively grown and improved. 2. The Women of Marvel Panel is the best panel I have ever attended. I mentioned above that panels are my least favorite thing about comics conventions (with the exception of Con Flu, maybe), but this panel was unlike any panel I’ve been to in the past. The room was energized, and it wasn’t just excitement about upcoming titles, though that was there, too. It felt like everyone who was there in that room had a connection to each other — male, female, or otherwise.

The presenters spoke frankly to their audience and in a way that comics fans maybe aren’t usually spoken to. This was a conversation that was happening, between the fans and the creators and editors. It’s a conversation that we’re all having with each other and that, hopefully, we’re bringing outside of the con. We’re talking about inclusivity in comics and not just the inclusion of women (characters, readers, writers, artists, editors, etc.), but of minorities and those who belong to the LGBTQ+ community.

There was a sense that although it’s great we’re having this conversation and that changes are being made or that our complaints are at the very least being acknowledged, there is still a long road ahead of us. And behind that realization was a relief that there were others feeling the same way. Real, actual people sitting next to you who had your back and could remind you that this is a real thing, that it’s not an illusion, that mainstream comics need to be more diverse.

It was a good feeling.

Until Saturday night I was certain I was going to miss out on NYCC altogether this year, but Christina came to my rescue with surprise passes for Sunday, and as we all know, a surprise Comic Con is the best kind. I was able to attend Image’s Lazarus panel, with artist Michael Lark and all-time-favorite comic writer Greg Rucka, both of whom were very excited and cordial. The two demonstrated what makes them such great comics collaborators, each taking every opportunity to give credit to the other for why Lazarus is such a success. Rucka broke the jovial tone only once to rail against political and social apathy and encourage the crowd to get angry about social and economic injustice. The panel was moderated by current Image editor and former ComicsAlliance Editor-In-Chief David Brothers, and it was nice to meet him in person, as well, however briefly.

The rest of my con was spent begging for doodles in my very first Comic Con sketchbook. I’m on a serious James Bond kick right now, so I asked a number of artists to draw a quick 007-themed sketch in my book. Aaaaand here they are! Click on any image for a higher-res look, and please click through to see the fine work these artists make when they have more than thirty seconds to draw. Editor’s note: Okay, we’ve made a slight miscalculation here. Pfeiffer’s Comic Con was meticulously documented by brave photographers Christina Harrington and Max Robinson, and there’s way too much to tack onto the bottom of this already long article. So tune in Saturday for a special photo-packed sequel to this article all about beloved Trash Boy Mike Pfeiffer’s NYCC experience!

So how was your Con weekend? Tell us in the comments section, or on our Facebook page!