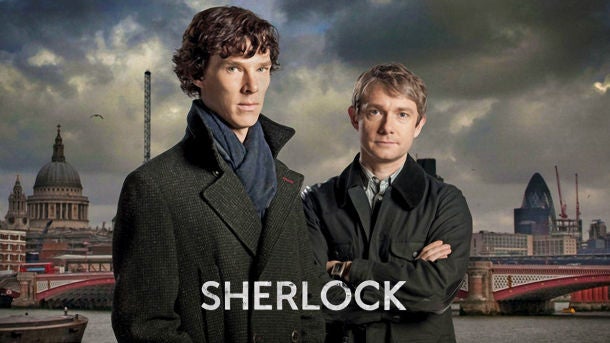 “Those who do not want to imitate anything, produce nothing.”
-Salvador Dali

The third season of BBC’s Sherlock is over and done with. Much like the previous two seasons, each episode was comprised of three individual servings of impressively paced episodic story arcs all contributing to the overall plot of the show. In short: Good TV. However, like with any season finale or movie sequel, we are left with two questions “Was it as good as previous installments?” and “Does it matter?” Personally, I don’t think this is so important because “goodness” and “meaning” are relative to the individual.[1] But with this in mind, Season Three was different. Structurally, Season Three felt a lot more like a traditional 3-act play. This is evident through the clever use of the wedding in episode two, which acted as a kind of bottle episode.[2] It focused on developing Mary’s character while simultaneously bridging the rising action of the first episode with the falling action and heavier drama of the third. Cool stuff.

However, the most notable difference in Season 3 was its nod to fandom in the premiere. It depicted Sherlock fans in the Sherlock world concocting scenarios in which Sherlock could have survived the fall from top of St. Bart’s—a popular pastime for the more hardcore Sherlockians out there. “The Empty Hearse” also included a very meta Moriarty/Sherlock moment that I am sure pleased many and confused a number of mom-types. Showrunner Steven Moffat has acquired a strong internet fan following on Tumblr since taking over Doctor Who in 2009. So clearly this episode was a sort of acknowledgement from Moffat to the vocal fan communities, right?

You would think so, but when asked about his relationship with the fans, Moffat distanced himself from fandom culture by stating that while fandom is wonderful, it is a “’one-way thing’”(Jeffery, 2014). He also went a step further to express a surprising ignorance in regard to Tumblr by saying: “’I’ve been on tumblr once a while ago and it seems just to be a place where people who really want to kill me gather’”(Jones, 2014). I find this difficult to believe. A number of equally skeptical peers of mine have indicated that he is probably covering himself from any number of people coming out of the woodwork to serve him with intellectual property lawsuits. The other reason is that Moffat and his co-creator, Mark Gatiss, probably want to feel a sense of proprietorship over their creation.

This raises a few interesting questions:

1) Can fandom truly ever be a “one-way thing”

It is understandable that an artist would want to insulate himself from external influences during the creative process. How else could one confidently claim ownership over one’s work? TV writers participate in an ongoing process of production, release, and public review from season to season. This, alongside multimedia and technology being such a pervasive elements of everyday life, makes it pretty difficult to separate the creator from his audience. As soon as you come into contact with any external idea or concept, it immediately projects some kind of influence on you. Internet folks would call this phenomenon “can’t unsee” which is a less formal way of saying “unring the bell,” a legal term which can be grounds for a mistrial. Once you hear an idea, it takes root in your brain and it is not coming out. Biased news organizations utilize this concept masterfully to get away with making exaggerated claims. If they are forced to air a retraction, it does not matter. The damage is already done and countless impressionable minds have already been influenced. So, by the same token, nothing that involves a human interaction on any level can truly be a one-way thing.[3]

But should fandom be one-way? I would argue yes.

For this portion of [CN] you’re going to have to do me a favor and rid yourself of any negative feelings you have about fandom. It provides an expressive outlet for people to pursue a passion and meet others like them. If it is not your thing, that is fine. However, shunning a person—especially a young adult—for pursuing self-expression outside of what we have been socialized to understand as normal is pretty messed up.[4] Participating in fandom can be a constructive experience. But allowing fans to have a say in the creative process of the original body of work is a detriment to the final product.

Community creator Dan Harmon’s relationship with his fans is one example. On the one hand, fan backlash played a role in getting Harmon rehired as Community‘s showrunner after the fourth season, which was made without him, fared so poorly.[5]  Harmon is known for interacting with his fans and putting himself out there. However, his very public fan interactions have made him a target by many blogs and social media sites trolling to turn his gaffs into website hits (Harmontown #76). This puts the creator in competition with his creation, making it difficult for fans to enjoy the end product because they are in conflict with who makes it.

Allowing the creator to pursue his vision and take it in the direction he chooses provides for a strong firmament which fans can then consume, process, digest, and deviate from. Fans and creators existing in two separate spheres connected by a one-way street ensures that the creative processes occurring on both sides do not interfere with each other. Moreover, most shows use a number of directors and writers over the course of any given season. Making each of these episodes into a cohesive series requires a show’s creator to have a strong vision of where the story needs to go. To do this, the fans need to take a backseat. Once a show airs, a fan can take the ideas presented in the show and turn them into something constructive and meaningful. Whether it be a fanfic or fangif, fandom allows people to pursue something they passionate about independent of a show being ordered for another season.

It will be interested to see what wonderful and bizarre things the internet comes up with between now and the debut of the next season of Sherlock. However, it goes without saying that the ideas discussed here are not limited or unique to Sherlock. The sociology surrounding multimedia is super fascinating as anybody who owns a TV, phone or computer is an active cultural participant whether they know it or not. I encourage you to take a critical look at how you consume and produce media. As always, the folks here at Deadshirt want to know what’s on your mind. If you agree or disagree, drop a comment below. How have external factors influenced how you approach things in your life?

[1] “Relativity” is the ninja smokebomb of the media critic world.

[2] To be clear, this is not in reference to the stereotypical money-saving aspect of bottle episodes but more how the episode’s plot is confined to a particular setting and focuses on character development. In this sense, the setting is the reception hall as it is the physical space the characters occupy while Sherlock gives his Best Man speech. Quite well done. I could go on but instead here’s an interesting interview with Vince Gilligan.

[3] Save becoming the next J.D. Salinger, which—yeah no.

[4] In this same vein, Laci Green has a really interesting video about the counter culture surrounding selfies and pre-conceived notions of beauty.