Hyrule Warriors has something old and something new.

At this point, it appears that Nintendo’s solution to their Third Party Problem is to partner with outside developers to develop first party titles. While this has worked to varying degrees in the past, with some being great (Donkey Kong Country Returns) and others being pretty bad (Metroid: Other M), it certainly seems to be a good way for the Big N to keep developers engaged in their comparatively underpowered systems. That being said, I don’t think anyone could have predicted a fusion between the hyper-aggressive Dynasty Warriors series and the pensive, more complex Legend of Zelda games. What Nintendo and Koei Tecmo have on their hands is a classic Reese’s Situation, but instead of delicious chocolate and creamy peanut butter, it’s more akin to bananas and mayonnaise (or Miracle Whip if you nasty) – you wouldn’t expect it to work, but it does, even if it’s a little funky. Put another way, Hyrule Warriors is The Legend of Zelda filtered through Michael Bay’s oeuvre: a big, dumb, flashy experience that is so packed with fan service and fun that you’ll be hard pressed to notice that the underlying gameplay isn’t all that special. 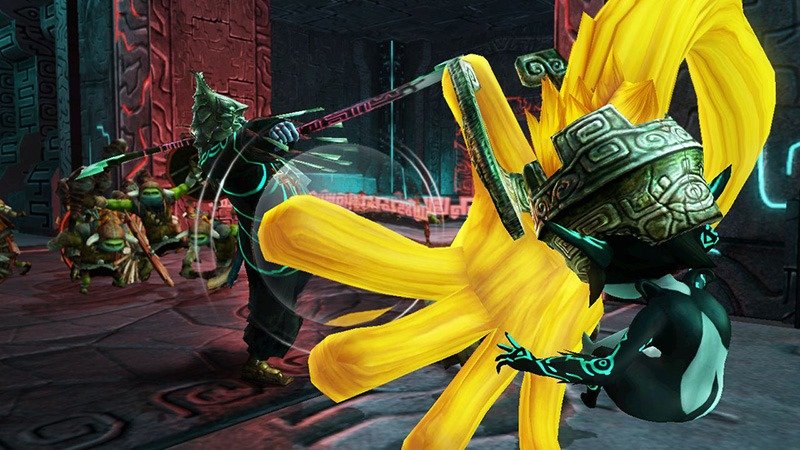 If you’ve played a Dynasty Warriors game before, you can expect basically the same thing here. The player-controlled character is basically an Omnipotent Battle Hero who must sprint around the battlefield as they are tasked with various missions over the course of each stage. These missions can range from capturing enemy bases (by killing lots of enemies) to protecting or escorting targets (by killing lots of enemies) to taking out bosses (killing lots of enemies in the process). Seeing the pattern yet, super sleuth? The core gameplay hook of Warriors consists of mowing down hordes of hapless grunts, feeling like a god as you use the simple branching combo system to cut large swaths through enemy forces. When you kill enough little dudes, your super meter fills up and you can unleash a big, screen-clearing mega attack. It’s like a video game Viagra commercial.

Conversely, if you’ve played Zelda before, this will be a pretty substantial divergence. There are no dungeons to speak of – no keys to collect or puzzles to solve. There is no sprawling overworld. The vast inventory of typical Zelda games has been replaced with a core group (bow and arrows, bombs, boomerang, hookshot) that are mostly useless except in a few key situations, usually when the game spoon feeds it to you. The story is noticeably fluffy for a Zelda game – Hyrule is in peril because [spoiler alert, maybe?] perennial villain/demon pig-lord Ganondorf has possessed the sorceress Cia, who proceeds to lay waste to the kingdom because:

1. Ganondorf wants the Triforce, duh
2. Cia is jealous of how close Link and Zelda are and she wants Link all to herself. Really.

Really, the best rationale for all-out war is a schoolyard crush, right? Now, to be fair, Link is a fucking babe in this game. Just look at this beautiful Hylian prince:

He’s easily the prettiest iteration of the character to date; it’s no wonder all the ladies in the game are fawning all over him. That hair, and those big eyes, and, um…wait, actually, let’s just — okay, here:

Oh shoot, we embarrassed him! (Thanks to Deadshirt’s own Jen Overstreet!)

There, fixed that for you.

One of the main hooks for Zelda fans in Hyrule Warriors is the sheer amount of characters that are playable, most of them for the first time in franchise history. Team Ninja did a good job of structuring the game’s story so that characters from multiple entries, which take place at different points on the series’ contentious and convoluted timeline, can coexist in the same scenario. Fan favorites like Midna, Sheik, and Impa are joined by less-expected characters like Darunia and Agatha. It’s especially nice to see a game that has more female playable characters than male ones. Plus, how often do you actually get to play as Zelda in her own namesake game? Even Ganondorf and his underlings Zant and Ghirahim get their own little playable campaign. Every character has their own distinct fighting style and move sets, and some characters can wield two or three different primary weapons, including some unexpectedly cool throwbacks; for example, Zelda can wield the Wind Waker, while Lana uses a staff that lets her ride on the Deku Sprout from Ocarina of Time. (Protip: if that last sentence means nothing to you, you might not get the most out of this game).

Enemies constantly drop materials, which you can use to craft badges that upgrade each character’s offensive and defensive capabilities, as well as new weapons with individual stats and slots for buffs. True to form, stages are littered with secret Gold Skulltulas and Pieces of Heart as well. Over the course of the game, players visit stages based on three core Zelda titles: The Ocarina of Time, Twilight Princess, and Skyward Sword. All the different enemies, from low-level grunts to tougher captains and even the bosses, are pulled directly from these games, and look and sound just like you remember. Even the Moon from Majora’s Mask and the Great Fairy make cameo appearances. The sheer amount of references packed into the game are a pleasant indicator that the people making this game put a lot of love into it. If you’re a childhood fan like I am, this game wants you to know that Nintendo loves you, baby.

Apart from the game’s primary story, a.k.a. Legend Mode, there are a bevy of other game types to keep players coming back. In the excellent, addictive Adventure Mode, the player is presented with a large scale 8-bit map of the overworld from the original Legend of Zelda, divided into a grid. Moving to any space on the grid triggers a unique gameplay challenge, whether it’s something as simple as defeating a number of bosses in a time limit, or something more challenging, like clearing a map with only one health heart. Clearing grid squares gives you item cards that you can use to find secrets hidden on the map, unlocking more weapons and characters.

If you’re the kind of player who gets lonely, Hyrule Warriors boasts a nice co-op mode, where one player uses the TV and the other uses the screen on the Wii U gamepad. It’s super-convenient not to have to share a screen, and the only drawback is that the normally buttery framerate suffers slightly. There’s also a Challenge Mode, where it appears that Nintendo will be uploading new gameplay scenarios over time. Nintendo has also recently stepped up their game regarding DLC, detailing upcoming packs with new characters, maps, weapons, costumes, and modes. You can buy a “season pass” that gets you all the content for a surprisingly reasonable discounted price, and doing so unlocks a bonus character for immediate use. Ultimately, Hyrule Warriors is of two minds: one, a radical departure from the core gameplay that made the series so beloved, and the other, a heartfelt love letter to the fans. Anyone who has spent time previously with Nintendo’s mainstay franchise will find plenty to enjoy here, despite the change in gameplay. Yes, the game can occasionally be a slog; missions can drag on and extended play periods will feel repetitive after a while. But every time I’ve started to feel a little fatigued by the game, I unlock something or notice a little nod to the colorful history of the franchise that made me smile. Warriors is to Zelda what Kart or Party are to Mario: a fun side game that earns its weight just by letting players enjoy the characters and settings outside of their normal context. Zelda fans have never really had a game that celebrates all that before, and that alone makes Hyrule Warriors worth it.