Readers of Suzanne Collin’s Hunger Games trilogy have long been aware that the third installment of the series, Mockingjay, is a bit of a letdown compared to the electric first two. The disappointment lies mainly with the lack of the bloody tournament of the series’ title, the Hunger Games themselves. Although readers could hardly expect Katniss and her pals to end up in the human hunting arena a third time, it can’t be denied that part of the draw of the series has always been the sickly voyeuristic thrill of the gladiator ring.

Now that the Hunger Games have been cut off with the emergence of a rebel group, we must prepare ourselves for a new type of story, which is begun in Mockingjay, Part 1. This story is not one of individual survival but of full-on warfare. Rescued from the Games, Jennifer Lawrence’s Katniss now lives in District 13, a deep underground fortress where seventy-five years of military preparation are finally being put to the test. Katniss is deeply traumatized from her time in the Games and spends much of her time having violent nightmares, distrusting the calm faces around her, and fretting about the fate of her sort-of boyfriend Peeta (Josh Hutcherson), who is the hostage and anti-war mouthpiece of the Capital. To the disappointment of many tweenaged girl fans (and a certain review writer), Katniss does not spend much time with other sort-of boyfriend Gale (Liam Hemsworth), either. The romance aspect of the series has also been divisive, not just in the Gale-vs.-Peeta sense but in the sense of whether a love triangle was necessary at all for such a dark and dystopian story. You can put me in the pro-romance camp, not because I love watching pretty people make out (although I do) but because I frankly don’t think the series is the intellectual political thriller it wants to be. A little angsty smooching keeps us rooted in the fictional escapism of the world, instead of constantly forcing the relation between the films and our own world.

The paralleling has never been as blatant as it is in Mockingjay. After watching no less than four (maybe more) scenes of Katniss staring out into the smoking ruins of a bombed city or village or countryside, falling on her knees as the camera zooms out across the dusty rubble…well, it feels a little exhausting. During a long sequence toward the climax of the movie, the President watches tensely from a screen-filled control room as a veritable SEAL Team Six breaks into a stronghold to recapture the Capital’s prisoners, and the similarity to Zero Dark Thirty was so strong that I didn’t know whether to be disturbed or annoyed. I was almost expecting an Obama cameo and a “We got him!” declaration. For some, this push for relevancy will be a reason to praise the film, and while I can’t exactly begrudge them that, it was not to my taste.

This isn’t to put down Mockingjay as a whole. In fact, this film is the most emotionally gripping and character-driven installation of the series. Jennifer Lawrence continues to prove a strong and tasteful actress as her character is subjected to an avalanche of emotionally wrought dialogue. What I’ve always liked about Katniss is that, well, she’s not particularly likable. Short-sighted and strong-willed, she spends as much time being an obstacle to the plot as she does enabling it. She is the face of the rebellion, but she’s one of the few movie heroes whose claim of “I never asked for this” is an honest one. When her wranglers, who include the late Philip Seymour Hoffman as Plutarch Heavensbee and Julianne Moore as President Coin, realize she’s just about useless when reading from a script, they send her into battles to evoke the anger needed to film their propaganda shorts. 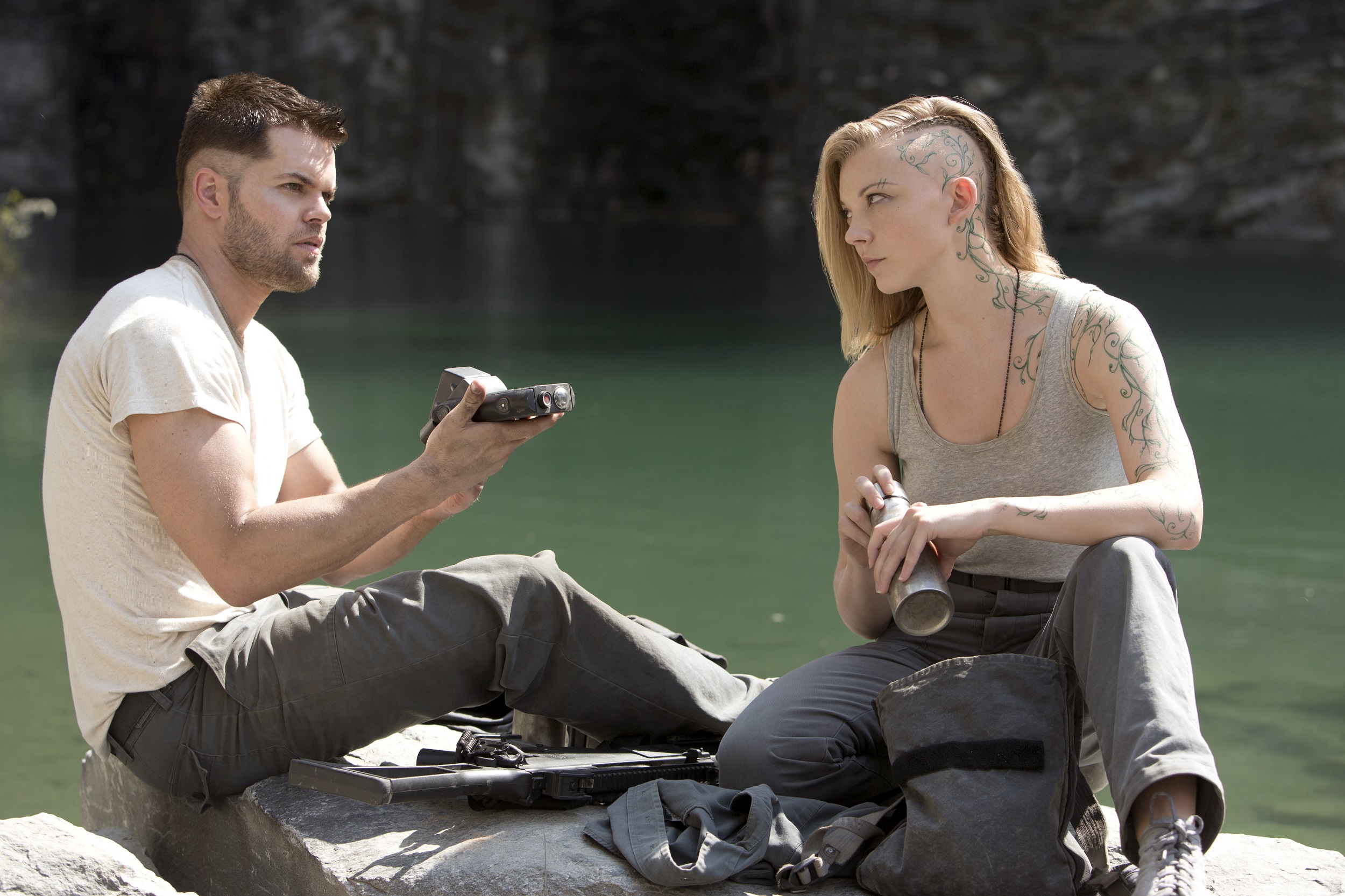 Oh yes, because much of this film has to do with the public relations aspect of rebellion, a point which I personally found much more interesting and rewarding than the war itself. After all, we’ve known the Capital is evil–I mean, it holds an annual children’s murder tournament, for crying out loud–and we don’t need additional footage of hospitals being bombed to remind us who the enemy is (although that scene, again, is placed to point fingers back at us). A more compelling story presents the PR logistics of raising a rebellion against a violent totalitarian government that has a monopoly on all civilian communication. And while fictionalized bombings in Mockingjay can feel like a too-trite commentary on modern warfare in the Middle East, the scenes involving the will of the people do feel sincere in their homage to the Arab Spring.

If all this sounds like I’ve started reviewing the wrong movie, don’t worry, I’m pretty sure it was really The Hunger Games. After all, we still had Elizabeth Banks’s trilling fashionista Effy and Woody Harrelson’s friendly drunk Haymitch, although both parts are unfortunately slim, and I would have preferred to swap their limited screen time with the dull Prim (Willow Shields), Katniss’s sister, who isn’t ever particularly necessary to the story despite being the driving motivation of the entire series. But Effy and Haymitch, who have historically offered the comedy and high absurdity of the movies, are sobered up (literally in Haymitch’s case) for Mockingjay, as are all of the previously “fun” characters. Sam Claflin’s Finnick Odair, for example, who delighted in Catching Fire with a balance of slimy bravado and genuine heroics, is given some pretty sobering character insight when we learn that he’s spent the past decade as a sex slave puppeted by President Snow, the immutable Big Bad of the series still played with satisfying evil-cool by Donald Sutherland.

This isn’t the first young adult series to take a turn for the grim in its later chapters–Harry Potter turned out to be a bit of a shock, didn’t it? The Hunger Games started off pretty bleak in the first place, but now we’re on a whole new level of trying to fit terrible things into a PG-13 rating. This isn’t a bad thing, but just remember that this really isn’t a series for children, despite its young protagonists. Fans of the series should definitely see this one, but leave the kids at home, or prepare to tackle some pretty serious facts-of-life questions afterward.

The Hunger Games: Mockingjay, Part 1 is in theaters now.