Deadshirt Is Watching…is a weekly feature in which Deadshirt staff, contributors, and guests sound off on the television shows we’re tuned into, from intense dramas to clever sitcoms to the most insane reality shows. This week: Bee and PuppyCat, Galavant, and The Millionaire Matchmaker! 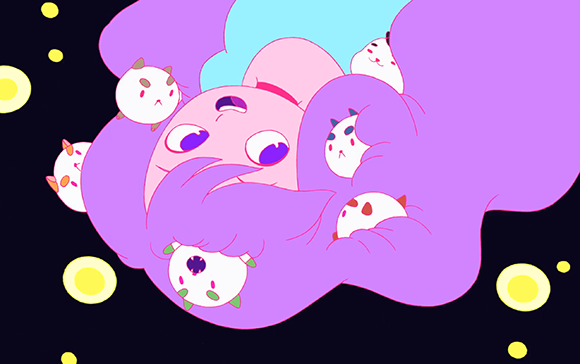 Natasha Allegri’s Bee and PuppyCat would be the most delightfully weird cartoon on American television if it were actually on television. It’s the story (barely) of a bored, off-putting, perpetually broke young woman and her sidekick, who looks like a cat, smells like a dog, and speaks a weird synthesizer language. The two of them embark on various extradimensional “temp jobs” and social misadventures. The concept itself would be weird enough, but the show also features imaginative alien worlds and concepts, out-of-nowhere sight gags and running jokes, and charming but completely off-kilter line readings by lead actress Allyn Rachel.

I chose the descriptor “delightfully weird” very specifically. Bee’s brand of weird is designed to make you smile a big goofy smile, not just to put off squares who won’t get the random humor. It doesn’t assault you with the weird. It’s the tonal opposite of, say, classic Adult Swim fare like Aqua Teen Hunger Force, which is usually consumed (and composed) in a haze of pot smoke, gleefully imagining your baffled parents trying to make sense of it. Bee doesn’t assault you with the weird. It’s a warm, comfortable blanket of weird.

In this episode, We meet Bee’s landlord, who is a morose British child, and a cleavage-obsessed beach crab who just wanders around pointing out whenever two roundish things get close to each other. The episode’s temp job puts Bee in a puffy cat costume so that she can be fawned over as a pet by giant talking cats at a day spa. It’s Steven Universe and Bob’s Burgers baked into a cake with Twilight Zone frosting.

Episode Highlight: We learn that Bee and PuppyCat’s favorite show is Pretty Patrick, a cooking show (maybe?) in which a cute boy talks about what he’s eating and then offers to share some of it to you, the audience. Bee responds to him like he’s in the room. The most interesting thing about Galavant, ABC’s musical fantasy comedy “extravaganza,” is that you probably know whether you like it or not already, based on the trailers and general premise. If you think a musical series stylistically and tonally reminiscent of Spamalot and The Princess Bride sounds like a fun watch, you’re probably right! If you think it’s a grating exercise in obnoxiousness, well, you’re not likely to be won over. It’s definitely not for everyone, is what I’m saying. But for me, a moderate Disney and stage musical buff who nonetheless has a cynical streak and an aversion to twee, it was pretty fun and worth the initial trepidation.

Galavant follows the titular knight (Joshua Sasse), whose life has gone off the rails ever since his attempt to save his love (Mallory Jansen) from marriage to a cruel, incompetent King (Timothy Omundson) ended with her choosing the power and security of a royal marriage over his passion. He’s been a drunk and a wastrel ever since, despite the best efforts of his squire (Luke Youngblood of Community– POP POP!) to get him back on his feet.

The series features some very catchy songs by Alan Menken and his current writing partner Glenn Slater, and despite ABC’s ownership and the duo’s pedigree, there’s definitely more tongue-in-cheek humor here than a typical Disney fairytale. There’s plenty of jokes and referential humor, and while they don’t always land, enough of it made me laugh that I think it’s worth giving the show a shot. ABC is airing two of the eight episodes each Sunday this month, so while it feels like they may be burning through it rather than looking for a long-term prospect, I’m still excited to see how Galavant, such as it is, ends up.

Episode highlight: Luke Youngblood is great pretty much every time he’s onscreen, and I really hope future episodes give him more of a spotlight. Omundson has great comedic chemistry with Vinnie Jones as his hulking henchman, and the cast in general seems to be having the kind of fun a project like this requires. Other reviews have said that the meta-references grow thin quickly, but for now, I’m totally fine with jokes like training montages and “roosters as collateral.”

About once every couple of months, I have a temper tantrum in which I declare that I will never watch another episode of Millionaire Matchmaker again. I mean, it’s a ridiculous show in the first place—a matchmaking service for millionaires—but it’s really Mistress-at-Arms Patti Stanger that gets to me. It’s not even because she’s shrill and overbearing (if I cut out every shrill overbearing reality mother figure out of my TV diet, I’d have nothing left), but because her “matchmaking” skills ultimately come down to saying things like (and I quote): “Why are you here? Tits, ass, or legs?”

If Patti was standing by her old set-up of transparently setting up bimbos with rich old men, I could deal with this sort of disgusting deduction of women’s bodies, but no, she’s declared herself the Love Expert and she’s helping these men find The One. a pretense that is emphasized with this season’s slick new look. Gag me, why don’t you?

But there’s no denying that Matchmaker ranks among the most entertaining of reality garbage, especially for the layman who doesn’t have time to get involved in lengthy Housewife dramas, and this week’s episode is a perfect example. Our “millionaires” are Ally Zarin, daughter of Jill from Real Housewives, and–let me check my notes–Prince Maximillian Ferdinand Von Anhalt of Germany. I was unaware that being a German Prince still meant anything in this day and age, but being Zsa Zsa Gabor’s adopted son certainly does, so by that credit he’s got my approval.

There’s a lot of ridiculous going on in this episode, from Patti badgering potential dates about their bar mitzvah status to declaring that Prince Ferdinand must introduce himself as “Max from New Jersey” because that’s what women want. Thank God for Prince Ferdinand, who is basically a character straight out of Kroll Show, which is good, because Kroll Show is very funny and Patti Stanger is not.

Episode Highlight: “A typical day for me is drinking champagne and making a lot of business stuff with my manager. Go shopping, buy some watches. Meet peoples, make parties.” – Prince Ferdinand