Deadshirt Is Watching…is a weekly feature in which Deadshirt staff, contributors, and guests sound off on the television shows we’re tuned into, from intense dramas to clever sitcoms to the most insane reality shows. This week, Dominic Griffin breaks the bad news on this season of True Detective. 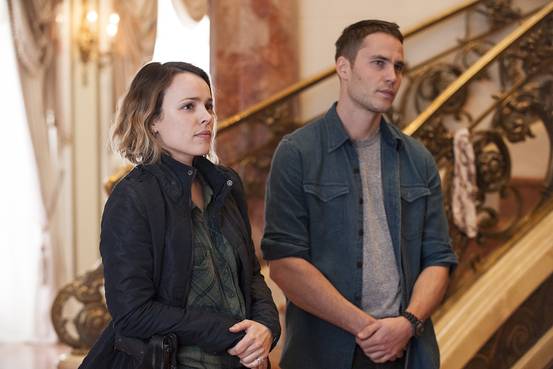 Three weeks in, we can all admit that any number of last year’s omnipresent #TrueDetectiveSeason2 memes would have been preferable to the offensively dour, uneven, and confounding fucking mess Nic Pizzolatto has passive-aggressively presented us thus far. In terms of flipping the bird at your audience, all of society deciding Matthew McConaughey and Cary Fukunaga were responsible for Season One’s success is critics not appreciating Pinkerton, and Season Two is everything Rivers Cuomo did after “Hash Pipe.”

The gruff, self-serious showrunner has replaced the psychfolk bromance of Rust and Marty with this forced, frustratingly earnest quadrilateral of grim, dark, tortured bullshit. Tim Riggins from Friday Night Lights tries to apologize to America for wasting millions of Disney’s dollars on John Carter by playing a rote, closeted highway patrolman who did bad things in Iraq and “doesn’t talk about the desert.” Vince Vaughn attempts to salvage his credibility with an uninteresting turn as a crime lord going straight that would be better if A) Michael Shannon did it or B) it was just Wilson Fisk’s arc copy and pasted from Netflix’s Daredevil. And poor Rachel McAdams. Regina George has the unenviable task of portraying the literal manifestation of the Dear John letter wrapped around a brick that Pizzolatto has penned and heaved at the glass ceiling all female protagonists in crime fiction live under. His tone deaf and labored “tough chick” archetypal fuckery is why you don’t bother asking for diversity from guys who would basically be Tucker Max if they hadn’t read a couple of Alan Moore comics growing up.

The show’s only saving grace thus far is Colin Farrell, whose bloated, self aware approximation of rapidly deteriorating masculinity is the best thing accidentally on television. He plays Ray Velcoro, a hard-drinking bent cop whose wounded surliness is such a protracted put-on that it transcends cliché and becomes a special kind of poetry. Skin slack and stained with regret, his doughy visage resembles a bruised banana left in the fridge far past its sell by date. He’s the only cast member who seems to be able to deliver Pizzolatto’s dialogue (once a smooth glove wrapped around McConaughey’s calloused hands, now just so much overchewed tobacco) with any semblance of zest or believability. Velcoro’s tragicomic relationship with his large, ginger son is all I’ve managed to care about so far, and that’s a C Plot at best. If you’re wondering why I’ve yet to elucidate the A and B plots it’s because nobody gives a fuck about them.

Last year’s Yellow King arc wasn’t the tightest ship either, but you could forgive a lot of its misgivings because watching McConaughey and Harrelson struggle together was so relentlessly fascinating. I’ve seen Chinatown. I’ve seen LA Confidential. It’s going to take a lot more than a guy in a fucking bird mask and some subtle secret society iconography to get me to care about California land deals gone awry and whether or not Taylor Kitsch will develop a third facial expression beyond “gay panic” and “bewildered brood.”

Sunday’s episode improved upon Justin Lin’s hyperglossy cinematic posturing by settling into the subtly disturbing pulp of Janus Metz, but nothing can overcome the strugglewriting forced upon the ensemble. Pizzolatto didn’t think anyone wanted another season of buddy cop bullshit, but that buddy cop bullshit goes a long fucking way. I’m only still watching because I love cop shows! They’re the cheap pizza of television genres. To fuck one up you have to seriously dunk your dick into the cheese bowl, and Pizzolatto is as balls deep as it gets. There are hints of substance, sure, and in a post-Mike Brown, post-Freddie Gray world, I’m much happier to see traces of mistrust in gun-toting authority figures (Velcoro’s dad casually lamenting “no country for white men” resonated wonderfully), but overall, the show feels about as bland as a CBS procedural, and that’s far too low a bar for a show as ambitious as True Detective.

There are five episodes left, but I think we need to accept that this season is something of a wash. I’m just sticking around for Colin Farrell chugging Johnny Walker Blue and assaulting the parents of schoolyard bullies.

Episode Highlight: Trash Gawd Ray “Velcro” and Lanky Philosophical Scumbag Frank Semen saying the word “apopletic” to one another as though it was fucking Klingon.