Deadshirt Is Watching…is a weekly feature in which Deadshirt staff, contributors, and guests sound off on the television shows we’re tuned into, from intense dramas to clever sitcoms to the most insane reality shows (or, in the case of this week, only insane reality shows). 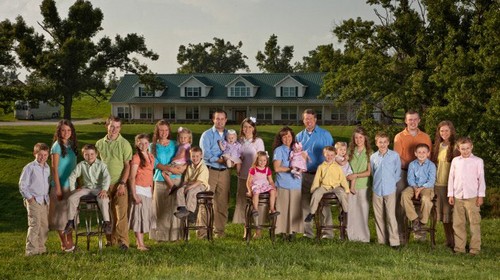 Having been on television for about ten years now, the TLC show 19 Kids and Counting, and the real life family it documents, are in for a brand shift. Michelle and Jim Bob Duggar (Mom and Dad, respectively) are famous for their children, or more specifically, the number of children they have: nineteen. And while the Duggars live under the birth-control-free belief that they’ll have as many children as God allows, it’s been five years since a new Duggar was added to the roster. So while the show is still all about babies and family expansion, the responsibility for that expansion has shifted from Michelle to her oldest daughters.

The two most recent episodes focus on Jill Duggar, recently engaged to Derick Dillard, and Jessa Duggar, currently in a courtship with Ben Seewald. Relationships with the opposite sex are held to a much higher standard in this family than with normal dating couples and those standards come with some serious rules. For one, physical contact is kept to an absolute minimum: Jill and Derick only started holding hands once they were engaged, and for Jessa and Ben even lingering side-hugs are looked at with suspicion. For both couples, their first kiss will be on their wedding day. Neither couple can be alone together, even in public places. As these episodes follow both couples on dates (hiking and wedding planning for Jill and Derick; a visit to a shooting range for Jessa and Ben, where Jessa had to placate her emasculated boyfriend after outshooting him on the targets), we spend most of the time looking at these courtship rules through the lens of the younger siblings who are dragged along as chaperones. Honestly, the most entertaining part of these episodes is watching the two young Duggar boys tag along on these, as there’s some real comedy in watching people stuck in awkward situations. And nothing is more awkward than being the only obstacle stopping two people from humping each other on the floor of an Arkansas shooting range.

Watching the Duggars go on dates is like looking back in time, albeit a time that still has Instagram and hairspray. The entire season seems to be split between leading up to Jill and Derick’s big day (they married in June and are now expecting their first child, spoiler alert), and asking Jessa and Ben when they’ll be engaged. As always, the draw with 19 Kids isn’t solely on family expansion, but on the way in which the family chooses to expand. It’ll be interesting to see if these Duggar daughters continue in their parent’s footsteps, and how successful (and how fair) this shift is.

Episode Highlight: “I’d chaperone again, but first I’d see what they’re having for dinner.”–Jill’s younger brother James, after being fed hummus and figs.

You can watch the Duggar family Tuesdays at 9/8c on TLC. After a few seasons of trying to out do itself with new competition concepts, including last week’s fun judge match, it’s refreshing to see the prosthetic makeup competition Face Off to get back to its roots with classic horror makeup. This week the contestants faced off (ha) creating characters based on slasher movie posters, with the winning makeup to be featured at Universal Studios Halloween Horror Nights. Any time the win includes real-world exposure, the contestants split the difference between either amping up their talent or having a complete meltdown, and this week was no exception. My favorite makeup came from contestant Cig, who somehow made a gory red mess into a breathtaking villain, but as it was incredibly bloody and complex, replicating it for a theme park was no dice. The judges made more than one questionable decision as far as the winner and loser this week, but with a season as riddled with talent as this one, I’ve no complaints for such stiff competition.

Episode Highlight: At the start of the foundation challenge, the contestants were instructed to say “Bloody Mary” into a mirror three times, and it was highly enjoyable to watch a group of grown adults cower anxiously behind each other as they chanted.

Face Off airs on Tuesdays at 9/8c on Syfy.

Well, I have the A&E app, and A&E’s got a new show called Love Prison, so it’s not like I really had a choice with this one. I mean, it’s called LOVE PRISON. What was I supposed to do, not watch it?

The premise is as follows: a couple who have been dating via the internet, but have never met in person, are stranded on an island for a week with, and I quote, “no producers, no modern technology, and NO ESCAPE.” Dun-dun-dunnnnnnn. The island isn’t a tropical paradise either, just a big rock off the coast of Connecticut. The couple is allowed one hour a day of “yard time,” the other twenty-three hours they must spend indoors. They get a set of bunk beds to sleep in.

This week, we meet Billy and Jeanne, both single parents, who have been dating online for several months. They’re both terribly annoying. Since Jeanne doesn’t want to get physical with Billy, and Billy doesn’t have much of a personality beyond “class clown,” they are forced to bear each other’s sexless company until they either drive themselves crazy with boredom or get drunk, or both. At an hour long, the show isn’t too kind to its viewers, either. It aims for originality by banishing all producer presence in favor of forty hidden cameras, but the daters still give talking heads, and all in all nothing feels very new or exciting. Once in a while a screen will be remotely turned on, and the couple will be forced to watch some “scandalous” clip of the other saying “incriminating” things, such as “I don’t know if I’ll be attracted to Billy” and “I’m sleeping with a bunch of other women.” Maybe a cooler couple might spice things up, but as far as Billy and Jeanne are concerned, Love Prison is more of a Love Bore.