Deadshirt Is Watching…is a weekly feature in which Deadshirt staff, contributors, and guests sound off on the television shows we’re tuned into, from intense dramas to clever sitcoms to the most insane reality shows. This week: Supernatural, Constantine, Gravity Falls, Parasyte, and Gotham! Not many shows get 200 episodes, so when you do, you party. This was no different for Supernatural, the show about two brothers who roadtrip across the country hunting and killing monsters. This episode saw Sam and Dean Winchester investigating several disappearances that orbit around a high school theater department’s most recent production: “Supernatural: The Musical.” Brimming with angst and in-jokes, “Fan Fiction” could easily have been an episode from an earlier season; in fact, much of the meta-commentary coming from the in-show play points out the cyclical themes of sacrifice and brotherly love.

The play-within-the-show provides an opportunity for fan stand-ins to critique the show’s weaker later seasons, and to showcase the various ways the fan community (a particular lively group, in Supernatural’s case) has tried to make up for these shortcomings, through fan art and fan fiction. Though if the showrunners spent more time addressing these problems and less coming up with various ways to get the word ‘bitch’ into a scene than maybe Supernatural would be as good as The X-Files, as it very clearly wants to be.

It would have been nice to see the episode work with the show-within-the-show concept for deeper meta introspection, especially since the big bad is (SPOILER ALERT) Calliope, the eternal Greek muse. Listen writers, it’s incredibly pretentious to use The Muse as a mouthpiece for calling your own story “truly special” and “epic,” while simultaneously laughing off your faults. “Fan Fiction” is a great metaphor for Supernatural itself, though maybe not in the way its writers intended: it’s a clever story with the potential for depth, but it’s just too caught up on it’s more superficial indulgences to get there.

Episode Highlight: Running an all-girls choir cover of “Carry On My Wayward Son” (a song that appears on Supernatural throughout all of its 10 seasons) over the last few minutes of the episode was surprisingly poignant. A few weeks ago I spent a little over 1500 words on magician/detective/conman John Constantine, including an introduction to his comics series, Hellblazer, as well as a brief discussion of the then-upcoming NBC drama, Constantine. Having watched the most recent episode, “A Feast of Friends,” I can safely say that my excitement for this show has waned. “A Feast of Friends” is Constantine’s version of “Hunger,” the first Hellblazer arc by Jamie Delano. An old friend of Constantine’s (the perpetually-sweaty Gary Lester) comes to him asking for help in trapping a hunger demon that he’s responsible for freeing. Before the episode is up, we’re gifted with several scenes of those possessed feasting on things even our Trash Boys would turn their noses up at, including a security guard’s meaty neck.

If this episode does one thing really well, it’s highlighting the difference in storytelling quality between Constantine and Hellblazer. If you’ve read “Hunger” or watched “Feast of Friends,” you know that John has to make a horrible decision in order to finally destroy the demon for good. Unlike “Hunger,” in “Feast of Friends” this decision is almost entirely made by another person, thereby absolving Constantine of any guilt or misgivings about the way he treats other people. This removes almost all complications from the inevitable fallout next episode, replacing what could have been a compelling character study with generic Man Pain, like most other procedurals. Even worse, it reduces John Constantine from the multi-faceted person in the comics to something more easily recognizable. It’s a shame that such a layered story can be reduced to something so shallow, and though I’ve been having a good enough time with this show, “Feast of Friends” makes me worried for the episodes yet to come.

Episode Highlight: Constantine saves the day by chanting some ancient language until the problem disappears; making it the fourth time the episodic conflict has been resolved this way. 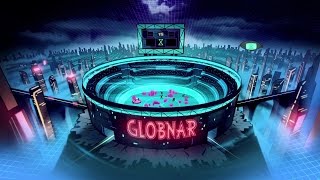 I like describing Gravity Falls to people who have never seen it before as “kinda like if Twin Peaks was a cartoon, with less murder and more toilet humor,” but it’s definitely way more than that. Yes, it’s a Disney Channel show, but creator Alex Hirsch and his writers make every episode a joy for both young and old audiences. The writing is clever, combining standard children’s cartoon humor for a 7-13 age range with many references and in-jokes specifically tailored to older viewers. Indeed, the show has a substantial following in the 18-30 demographic. Cosplayers of the main characters, twins Dipper and Mabel Pines, show up in droves at most cons these days, and it’s easy to see why.

What Gravity Falls does best is make viewers of any age and all stripes feel okay with their weirdness, and the weirdness that surrounds them. The arc of this episode involves time-travel, laser tag, and several great Tron references, but at its heart was the story of Soos. Soos (short for Jésus, as we discover in this episode) is the handyman for the Mystery Shack and best friend to Dipper and Mabel. When they learn of Soos’ imminent birthday, the twins decide to throw him a party. However, they discover he hates his birthday because, (SPOILERS) ten years previous, it was the day he realized his absent father was never going to come home. The resolution of the story is heartwarming and funny all at once, which is the strong suit of this show. But this episode stood out for me because of how new they made this pretty classic morality play feel. It’s a story and a moral that have been told a million different ways before, but this take on it felt fresh in a great way. If you haven’t seen an episode of Gravity Falls before, start now.

Episode Highlight: This episode features the return of time-traveling miscreant Blendin Blenjamin Blandin, voiced by Justin Roiland (of Rick & Morty fame). His performance is hilarious throughout the whole ep, but there’s a bit when he walks off, swearing to his bodyguards (burly techno dudes named Lolph and Dundgren) that he’s going to continue stammering until the Pines twins are found. It’s a little Rick & Morty nod for those paying attention, but it’s also a pee-your-pants funny moment.

It’s body horror and psychological distress as usual in the world of Parasyte, as the show enters what feels like its first long story arc. A few weeks back, Episode 4 brought up some interesting stuff about motherhood and the super-biological affinity that parents have for their children. One of the parasites we’ve met so far could not understand how the mother of its host so quickly recognized it as a fake. To a lesser extreme, Shinichi’s mother expressed her confusion with his sudden desire for privacy and vague behavior of late. It’s a thought that enters the mind of any teenager’s parent, but here we’ve got the added dramatic irony of Shinichi’s own worry that Migi may be changing him. And so, to cap off this focus on mothers, Parasyte raises the stakes to a new high by having a parasite kill and take control of Shinichi’s mother.

It feels like the right time for a dramatic shift. Shinichi and Migi are much more comfortable with their secret coexistence than they used to be, and Shinichi can only show off the power of human altruism and bravery so many times by standing up to school bullies. This new development is a wonderful barrage of delicious, plot-twisty novelty. The parasite in Shinichi’s mother was only able to injure his father, compelling it to hunt him down and kill the only human who is sure of its real identity. On its search, the parasite attacks Shinichi in his own house and leaves him for dead. Migi is able to heal him, but not without fundamentally changing a great deal of his body.

This is as personal as the human-parasite conflict has gotten for Shinichi and seeing how he reacts to this emotional pressure is good drama. When hiding Migi was the major motivation behind Shinichi’s actions, he was mostly concerned with staying “human” and keeping his mind separate–pure–of Migi’s influence. However, to save Shinichi’s life, Migi had to bond more fully with his body, giving Migi some new weaknesses and giving Shinichi some new strengths. Now, to become the hunter, Shinichi has immediately put his new senses and physique to work, trying to make up for his previous dependence on Migi as his only weapon. He is not unaware of the changes, but neither is he reluctant to use them. He is focused on the protection of his father and revenge for his mother, the most emphatically human emotions he has felt so far. The question now is how much he will embrace this literal inhumanness to realize his goals.

Episode Highlight: After being pierced through the heart, Shinichi is left for dead by the parasite inhabiting his mother. Migi hurries to save its host by some freaky means, first by forming a new heart out of what was once his right arm, and lowering it into the gaping wound in his back. 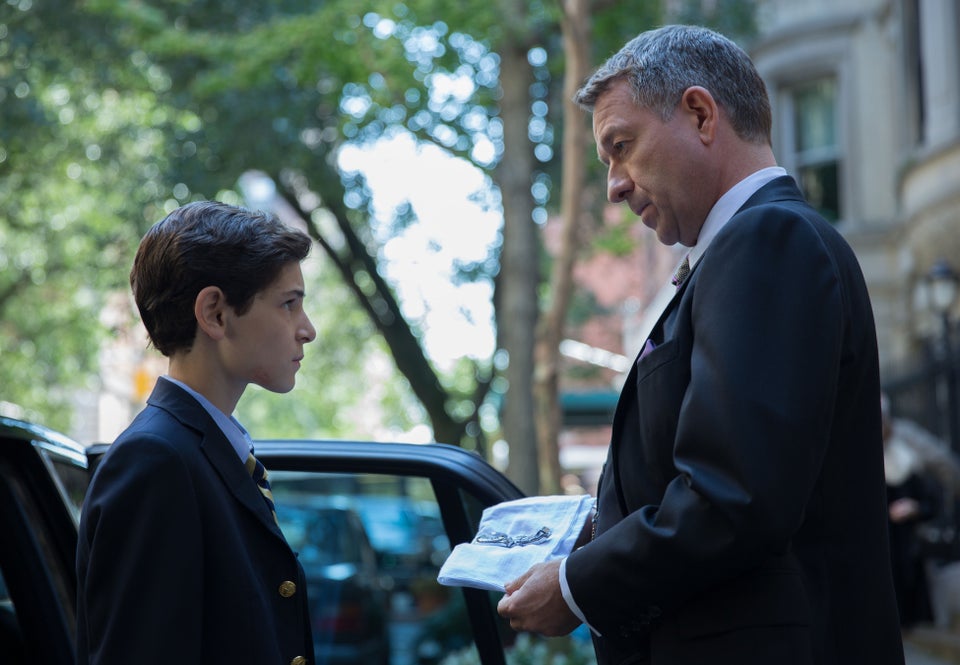 While investigating a financial firm Fight Club run by Black Mask, Jim Gordon and Sarah Essen marvel at the latest wave of costumed crime in Gotham City. Gordon suspects it was the murder of Thomas and Martha Wayne that transformed Gotham into something strange, dark, and hopeless, but viewers know, of course, that the Wayne murder didn’t just inspire masked villains; it also created the masked hero who will fight them. It’s fitting then that “The Mask” makes David Mazouz’s young Bruce Wayne finally feel like an essential part of Gotham.

Bruce Wayne’s previous appearances have often felt tacked on—“Hey, remember this is a Batman prequel!”—but he has significantly more to do here. Early in the episode he asks Alfred to “define normal” for him, and it’s only after beating the shit out of bully Tommy Elliott that stiff, bottled-up Bruce loosens up and acts like a normal kid who wants pizza for dinner. He’s found an outlet for his grief and anger, but it’s leading him down a dangerous road. What kind of kid grows up to be Batman? We’re about to find out.

The rest of the show not focused on baby Batman continues to be a fun mix of gritty police procedural and comic book camp. Fish Mooney tastes Penguin’s blood, Jim Gordon fights Black Mask with a katana, Bullock gives a rousing speech where he calls the GCPD “sons of bitches,” and Barbara…hangs around in a sexy robe? Barbara is still, maddeningly, the weakest character on Gotham; she wants to share half of Gordon’s life, but has no interior life of her own. The end of the episode gives a glimmer of hope that the writers know they have a problem with Barbara and have a plan to fix it. But for now, while the rest of Gotham is a wild, violent delight, Barbara’s scenes are as fun as your parents being shot in Crime Alley.

Episode Highlight: After driving Bruce to his bully’s house, Alfred gives Bruce his father’s watch, which “Master Bruce” immediately uses as brass knuckles to rough up the bully’s face.  A+ enabling, Alfred!